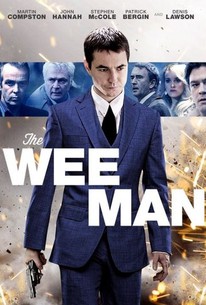 1970's Blackhill, Glasgow: 11-year-old Paul Ferris has learned quickly that life on the street is tough. Everyone knows their place. Poverty breeds corruption, crime, violence and bullying. Growing up immersed in a culture of crime, Ferris finally snaps when tormented one too many times by a vicious gang of bullying neighbourhood brothers who have made his childhood a living hell. Now in his late teens, despite his father's advice and in the frustrated knowledge that the law enforcement and police do nothing to help, he decides to take on his tormentors alone and systematically wreak vengeance on them. Consequently attracting a street reputation, Ferris is sought out by the 'Godfather' of the Glaswegian gangster community, Arthur Thompson Snr. Again ignoring his father's advice, he starts to work for the gangland boss throughout the '80s and '90s, rising through the ranks.

Critic Reviews for The Wee Man

The violent past of onetime Glasgow gangster Paul Ferris yields a banal biopic in "The Wee Man," returning multihyphenate Ray Burdis ("Love, Honor and Obey") to the director's chair after an absence of 13 years.

As a whole, it's forgettable.

Tediously self-satisfied at best, like a shady old bar bore holding you hostage.

But here, the various power-plays and shifting alliances feel like musical chairs, while [Ray] Burdis's attempts to make [Paul] Ferris sympathetic are undercooked.

Blows any intrigue by piling on one gangster movie cliché after another.

Manages to disappoint in every respect.

It's all rather familiar, well enough acted yet not entirely convincing.

A clichéd, wearily familiar true-life crime drama clearly made on the cheap.

On the whole, The Wee Man is a fascinating story well told - the first steps in making a decent movie.

[I]n this almost genteel film -- or as genteel as a film about men who intimidate and kill for a living can be -- [notorious Scottish gangster Paul] Ferris is a little boy lost, a rare man of principle in an urban cesspit.

There are no featured reviews for The Wee Man at this time.