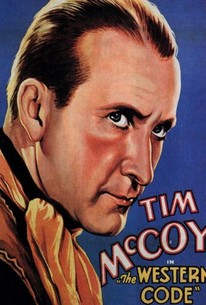 An average entry in Columbia Pictures' Tim McCoy Western series, The Western Code features perennial Bad Guy Wheeler Oakman as Nick Grindle, a crooked saloon keeper who marries lovely Polly Loomis' mother for her money. The woman dies leaving everything to Grindle while Polly (Nora Lane) and her brother, Dick (Dwight Frye), remain penniless. Texas Ranger Tim Barrett (McCoy), however, suspects the will to be a forgery. When Grindle is found dead, both Polly and Dick confess to the crime, each believing the other to be guilty. Assuming both to be innocent, Tim follows Grindle's henchmen, Worden (Matthew Betz) and Chapman (Mischa Auer), to the gang's hideout where he finds Grindle still very much alive. The dead man was in fact Frank Newport, a missing ranger whose face Grindle had disfigured to hide his identity. Worden confesses to the murder of the ranger, Chapman admits to having forged the will, and Grindle himself is killed in a climactic gun battle.

Hal Price
as brawler
View All

Critic Reviews for The Western Code

There are no featured reviews for The Western Code at this time.