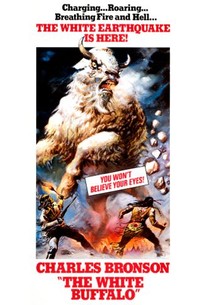 J. Lee Thompson directs Charles Bronson in this strange western variation on Herman Melville's Moby Dick. Bronson plays a man named James Otis, who is disturbed by dreams of a giant white buffalo. He returns to the west under his new name --Wild Bill Hickok. Amongst his travels, he meets Chief Crazy Horse (Will Sampson), who is roaming the plains in an obsessive search for the giant white buffalo that killed his young daughter. Chief Crazy Horse wants to slay the beast in revenge for his daughter's death, and Wild Bill Hickok teams up with him to hunt down the giant white buffalo.

Will Sampson
as Crazy Horse / Worm

Clifford A. Pellow
as Holt

Will Walker
as Frozen Dog Miner

Critic Reviews for The White Buffalo

The film, from the creators of King Kong, fails to live up to its billing.

More a white elephant than a white buffalo picture.

Audience Reviews for The White Buffalo

There are no featured audience reviews yet. Click the link below to see what others say about The White Buffalo!