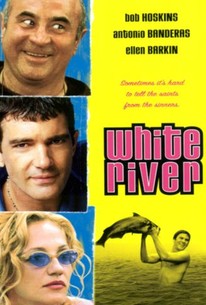 Two small-time crooks find themselves in deeper water than they can handle in this offbeat comedy. Edgar (Bob Hoskins) and Morales (Antonio Banderas) are a pair of minor-league grifters posing as men of the cloth, who travel through the deep South selling cheap socks at inflated prices to raise money for the fictional children's charity St. Mortimer's Orphanage. While stopping at a diner, Edgar and Morales spot a fellow fugitive from justice, the White River Kid (Wes Bentley), who is wanted for murder. Taking pity on a fellow outlaw, Edgar and Morales decide to warn the Kid that there are cops nearby and that he might want to make himself scarce; however, they soon regret their brief moment of compassion when they discover the Kid has taken over their RV and is now holding them hostage along with a waitress from the restaurant. The White River Kid also features Ellen Barkin, Beau Bridges, Swoosie Kurtz, and Randy Travis. While the film was completed in 1999, it received only scattered theatrical distribution in Eastern Europe and South America, and made its American premiere as a cable television feature in 2001.

Chad Lindberg
as Reggie
View All

There are no critic reviews yet for The White River Kid. Keep checking Rotten Tomatoes for updates!

There are no featured audience reviews yet. Click the link below to see what others say about The White River Kid!