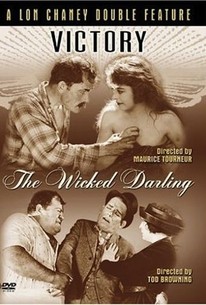 This typical 1910s Universal underworld melodrama starring the studio's foremost leading lady, Priscilla Dean, brought together a trio that would eventually create film history: Director Tod Browning, scenarist Waldemar Young and the man of a thousand faces, Lon Chaney. Miss Dean played a notorious female pickpocket who reforms when she falls in love with a sickly young man (Wellington Playter). Chaney played Dean's former cohort, Stoop Connors, a nasty specimen doing his level best to keep the lady from leaving her lucrative metier. Whereas Priscilla Dean's popularity proved relatively short-lived (her career was waning by 1924), the trio of Browning, Chaney and Waldemar Young went on to create London After Midnight (1927) and Where East is East (1929), two of Chaney's (and Browning's) best vehicles.

Wellington A. Playter
as Kent Mortimer

Critic Reviews for The Wicked Darling

There are no critic reviews yet for The Wicked Darling. Keep checking Rotten Tomatoes for updates!

There are no featured reviews for The Wicked Darling at this time.