The Wicked Dreams of Paula Schultz (1968) 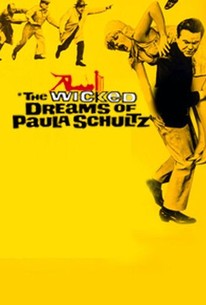 In this romantic comedy, a rebellious East German athlete forgoes her dowdy uniforms in favor of daring miniskirts. Soon the leggy track star attracts a lustful villain. To escape, she pole vaults over the Berlin Wall. There she is befriended by a broke black marketeer who has secretly agreed to return her to the communists in exchange for badly-needed money. He hides her in the apartment of an old army buddy of his who secretly works for the CIA. The smuggler is preparing to turn the girl over when he realizes that he is in love. The fellow is still busted and so tries to convince his pal to let her work for the CIA. When the athlete learns about this, she is crushed and decides to return to East Germany. Later, to prove he does love her, the smuggler dresses in drag and sneaks into East Berlin to see her. The woman is bowled over and together, they creep back into West Germany.

Adele Claire
as Coach
View All

Critic Reviews for The Wicked Dreams of Paula Schultz

The movie neglects no opportunity to be gross (everyone's pudgy hands, for example, are constantly on someone else, and there are two burps in the script, presumably for high comic effect), and yet it can't quite relax and be porcine.

There are no featured reviews for The Wicked Dreams of Paula Schultz at this time.