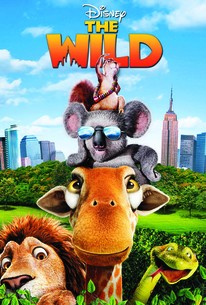 Critics Consensus: With a rehashed plot and unimpressive animation, there's nothing wild about The Wild.

Critics Consensus: With a rehashed plot and unimpressive animation, there's nothing wild about The Wild.

Critic Consensus: With a rehashed plot and unimpressive animation, there's nothing wild about The Wild.

In this wild and outrageous computer-animated comedy-adventure, an odd assortment of animals from the New York Zoo -- including a lion, a giraffe, an anaconda, a koala, and a squirrel -- discover what a jungle the city can be when one of their own is mistakenly shipped to the wild and they embark on a dangerous mission to rescue him. The film boasts an impressive vocal ensemble -- Kiefer Sutherland (as the respected lion leader, Samson), Greg Cipes (as Samson's son, Ryan), Jim Belushi (as Benny, the street savvy squirrel and Samson's best friend), Janeane Garofalo (as a quick-witted giraffe), Richard Kind (as a dim-witted anaconda), William Shatner (as a wicked wildebeest), and Eddie Izzard (as Nigel, an acerbic koala) -- along with cutting edge animation, and a story filled with hilarious situations. Director Steve "Spaz" Williams and producer Clint Goldman helped to revolutionize CG character animation during their long association with ILM, and were responsible for the acclaimed Blockbuster Entertainment commercials featuring Carl the rabbit and Ray the guinea pig.

Nika Futterman
as Dung Beetle No. 1

Julianne Buescher
as Dung Beetle No. 2

News & Interviews for The Wild

View All The Wild News

Critic Reviews for The Wild

The animation here impresses more than in the equally defunct Madagascar, but everything else smacks of an easy money-making exercise of such dimwitted inanity even the youngest kids will see through it.

The Wild roars back from a rocky opening act to a storming last reel, just managing to claw its way above comparisons with Madagascar.

What's so aggravating here is the grievous lack of wit, imagination and plain old story.

For the adult who may very well have to experience this film, and who may have experienced Madagascar, The Wild is better.

There's little to recommend of The Wild, which, despite its title, is about as pedestrian as you can get.

The animation is exquisitely detailed, down to the lions' individually moving whiskers -- but when's the last time you enjoyed a cartoon for its realism?

It's frightening to me to think that a group of studio executives sat around a room and green-lighted this film.

For all the rest of the film's unoriginality, The Wild moves along with solidly crafted wit.

The Wild is pretty tame, and in the increasingly crowded, competitive, survival-of-the-fittest world of computer animation, it meows but does not roar

The kids might be better off with a trip to a real zoo, if they haven't had their fill of Madagascar yet.

Audience Reviews for The Wild

Lets get one thing straight here, this isn't a bad animated film, not really, it just had the HUGE misfortune of coming out after 'Madagascar'. Well I'm not sure whether this came out too late or they did indeed try to rip off the aforementioned film, probably just too late. The plot, settings and entire idea is unfortunately almost identical to 'Madagascar'. A bunch of crazy animals all live together in a zoo lead by the mighty lion Samson. One day Samson accidentally upsets his cub son causing him to run away, get trapped and...you guessed it, get shipped off to Africa. So Samson and the other animals including a Koala, Giraffe, snake and squirrel, all go off on an adventure to rescue Ryan the lion cub. I can't really go into how utterly stupid this is seeing as its a kids film. But alligators in New York's sewers, the fact they all end up in Africa from leaving NY is pretty amazing, no idea where in Africa though but a volcano? And the fact there are hardly any humans around anywhere...including in NY. Yes I know its a silly kiddie film but lets have some degree of sense. One major problem here is the characters aren't too spectacular and AGAIN almost identical to errr that other wildlife animation. The only character that shows any signs of creativity was Nigel the Koala who has a British accent voiced by the brilliant Eddie Izzard. This little guy was pretty neat, Izzard does a great job making him a very nervous, easily scared unfit slightly squiffy fellow who hates the fact his likeness is a famous plush zoo toy souvenir. Its Eddie's dry, wry flat deliveries that make you laugh, well for us Brits anyway. Quite liked the Noo Yawker tawk of the sewer alligators also, that's a good accent. Plus, Patrick Warburton, standard requirement for animated films it seems. Not a problem seeing as his voice is brilliantly funny, lucky huh! Its all completely and totally predictable with visual gags that have been used all before. The animation isn't that bad, a different style to 'Madagascar' with fur effects giving a little more realism, Ryan the cub is undeniably cute. The wildebeests actually look pretty cool I though, quite evil and I liked the little intro animation revolving around them at the start. Shame they chose to include modern pop music within the film but other than that its a fair animation that is fun to watch. Had it come out before that other silly zoo animation then the tables would be turned, but such is life.

Disneys way of trying to keep up with Dreamworks Madagascar. This was a boring a terrible film.

It's quite simply a rip off of Dreamworks Madagascar, nothing is interesting and the characters are not at all original making this film one of the worst disney have created.

For an animated Disney film is is very disappointing. Maybe kids will get a kick out of the hectic commotion, but there is very little for grown-ups to enjoy here. The characters are flat, some even annoying, and the gags just don't work most of the time. At least the plot is always moving and doesn't stay in one place for very long. Still, there are very few rewarding qualities to find here, even the animation isn't entirely en par with its competition. If anything, this film shows what an outstanding job Pixar does again and again.