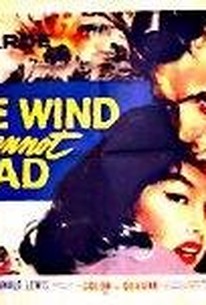 The Wind Cannot Read is a tearful British star crossed romance effort set against the backdrop of World War II. RAF officer Dirk Bogarde is assigned to learn Japanese in order to interrogate prisoners. His language instructor is the lovely Yoko Tani, daughter of an anti-Tojo businessman. Bogarde and Tani fall in love and secretly marry. Not long afterward, Borgarde is captured and tortured by the Japanese. While listening to the POW camp radio loudspeaker, he hears the voice of Tani, broadcasting anti-British propaganda. At first heartbroken, Bogarde vows to be reunited with Tani when he discovers that she is dying from brain disease. Escaping from the camp, Bogarde finally makes his way to the hospitalized Tani, where they share a tender moment before death enshrouds her. Richard Mason based his script for The Wind Cannot Read on his own novel. ~ Hal Erickson, Rovi

Avice Landone
as Nurse
View All

The film, gauzily sentimental though it is, benefits from superb on-the-spot photography and the main roles are pleasantly played by Dirk Bogarde and Yoko Tani.

There are no featured reviews for The Wind Cannot Read at this time.