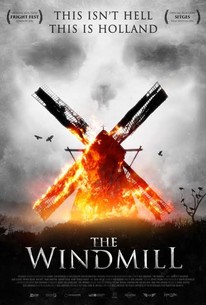 A group of unsuspecting tourists awaken a mysterious evil while on a trip through the Dutch countryside.

Kenan Raven
as The Miller

Nick Vorsselman
as Tourist on Boat
View All

Director Nick Jongerius can't entirely keep the story from feeling warmed-over, but fans should be too pleased by the movie's professionalism to complain much.

... a new slasher killer that could easily get a few more movies in him if they develop him and his mythology correctly.

The scenery was beautiful and the acting overall was pretty good, but I did feel that the film was a bit slow at times.

It's great to see a real, old-school flick of this nature, lovingly made and presented, with a real understanding of how these movies operate and why they were so popular in the first place.

The final shots of The Windmill feel like Jongerius surrendering his movie to how he thinks others would want it to end.

The Windmill is all about kills, but can't generate enough energy to power this derivative, sometimes nonsensical plot.

If nothing else, as least the film produces a golden line of defiance: "This isn't hell. This is Holland!"

slickly made and gorily hellish, if also a bit of a generic grind. Still, there is some fun to be had in these dark satanic mills.

Formulaic stuff that strongly recalls The Devil's Nightmare, another finger-wagging lesson in reaping what you sow wherein a busload of tourists dies for their sundry sins.

More discerning viewers will be confronted with deja vu, even while visiting an unusual setting for mass murder.

The story has a strong feel of the old Amicus anthology films.

Overall, an enjoyable film in an unlikely but imaginative setting. The legends of horror can welcome The Miller with open, bloody arms. He's a great addition to the likes of Jason and Freddy and deserves a sequel.

You know what the weirdest thing about this movie is? Seeing a respected actor Noah Taylor here. Now that may sound completely condescending to horror movies and their ability (or lack thereof) to cast people like Noah Taylor. Noah is a great actor, there's no denying that, but actors like him don't usually do these kinds of movies. And he's not even a big star like Chris Pratt or somebody else like that. Don't get me wrong, though, seeing him was a pleasant surprise and I'm glad that they managed to get him in this movie. It's not gonna open the floodgates, I doubt it will have any more impact, but hopefully it leads to more actors like Noah appearing in horror films like this. Moving on to the film. First things first, the setting for the movie is fairly unique. Not many slashers are set around this windmill where this myth of this serial killer who ground teeth and other body parts in his flour. When the villagers found out, the locked him up in the windmill set it on fire and killed him (duh). When this killer arrived at hell, the devil (apparently) was so pleased with his job on earth that he made him the gatekeeper and somehow send him back to look after the mill and kill unsuspecting sinners. This brings us to the film and its characters, all of whom have a dark past and all of whom converge on this Happy Holland bus tour that takes them all throughout Holland to see all the windmills and learn about their history. Of course, the bus tour ends up being a front. And people start dying in quite a gory manner. Yes, the setting of the movie is quite unique all things considered. Like I mentioned, not many horror flicks are set around windmills, which are as scary as a batch of newborn kittens. But this is still just a standard slasher with nothing, outside its setting, truly making it stand out above the fray. The acting, while solid when taken out of context, feels quite inconsistent. I don't know why, but there were some scenes here where the acting was just not particularly good. Some of these scenes even involve Noah Taylor, the best actor of the bunch. I just don't think the director was able to get the most out of his actors honestly. Then again, in this type of movie, acting doesn't really matter as much as the gore does. That's where, clearly, the majority of the budget went. There's nothing wrong with that, of course, but it would have been better if it had been supported by a stronger narrative. The concept of sinners paying for their actions isn't exactly a new one, but they probably could have gone to more interesting places as opposed to using the sins as justifications for why these people should die horrible deaths. The gore itself is tremendous, it really is, but its impact is lessened when it's used on people you don't care about. And that's a slasher problem, not just a problem with this film in particular. It's as symptom of a bigger problem, but, yes, the characters die horrible deaths, but it doesn't really mean anything. The movie isn't bad in the slightest, it's fairly decent all things considered, but fairly decent for a slasher doesn't really get you anywhere now does it. How many slashers are in existence? Goodness knows, but it's probably a fuck ton more than I will ever have the time in my life to watch. This movie just just another slasher on a long line of slashers. That's not to say that every horror film should strive to truly innovate, they can just iterate and still be entertaining. And that's what this movie should have been, not necessarily innovative. Just have a stronger story, more consistent acting and better characters and you have a vastly superior slasher on your hands. As it stands, it's just an average slasher. Which is more than you can say, as an example, for Rob Zombie's last film, 31 (which was a slasher). I don't know, I just wish this movie would have been better. It turned left when it really should have gone straight ahead. If you're looking for something gory, then this will be right up your alley. If you're looking for something more than that, well, you're barking up the wrong tree. This average, nothing more, nothing less. Watch at your own risk.