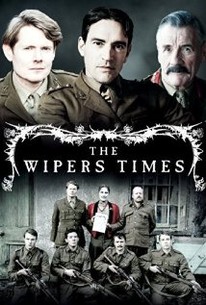 It's 1916 and British Captain Fred Roberts (Ben Chaplin,The Thin Red Line) and his detachment discover an abandoned printing press in the ruins of Ypres, Belgium. Roberts has an idea - he will produce a newspaper to raise the spirits of his soldiers. They call it The Wipers Times - after the army slang for Ypres - and fill it with spoofs, jokes, and subversive comedy.

Hugh Skinner
as Barnes
View All

Critic Reviews for The Wipers Times

Despite the limitations of a TV budget and scope, this is a well-acted account of a lesser-known story of World War I.

The Wipers Times presented them as two men with a shared and anarchic sense of humour and Ben Chaplin and Julian Rhind-Tutt (both excellent) had a great time trading quips and drinks while keeping their lips appropriately stiff.

It's an extraordinary true story. Funny, sad, and peculiarly British. And told with an affectionate twinkle. Lovely.

Andy de Emmony has pulled off a subtly counter-cultural triumph.

It's a quietly remarkable story, told with respect and, appropriately, irreverence.

Even fleshed out with free-standing cabaret-style sketches, at 90 minutes this sometimes felt as long as waiting for the war to end all wars itself to end.

A neat way to portray the partnership's comic material.

It was a shame to cram so much great material into a one-off. And it's a worse shame that, if Ian Hislop can write like this, he so often prefers to waste his talent on repetitive panel games.

Audience Reviews for The Wipers Times

There are no featured audience reviews yet. Click the link below to see what others say about The Wipers Times!