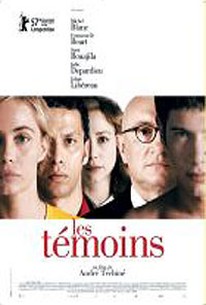 Manu is 20 years old when he arrives in Paris to look for a job. Initially, he moves in with his sister, Julie, who rents a room in a sleazy hotel. Her life revolves around music. She is training to be an opera singer and tries hard to partition herself off from her ebullient brother. Manu is a night bird. One night he meets Adrien, an extrovert and cultivated gay doctor in his early 50s with whom he strikes up a carefree, platonic friendship. Adrien soon introduces Manu to his circle of friends. Adrien takes Manu for a boat trip on the Mediterranean with a young married couple: Mehdi, who is a cop, and Sarah, a writer. The recent birth of their first child seems only to have made this unconventional couple even happier together, but appearances are deceptive. For Mehdi, the zealous police inspector, paternity has magnified his tyrannical side and this leads to excessive behavior both at work and in his sex-life. Meanwhile, Sarah is unable to come to terms with being a mother, feeling that it encroaches on her identity as a woman. Unable to bond with her baby, she immerses herself in her writing in a desperate quest for inspiration. Manu's arrival in Paris and his intrusion into Julie, Adrien, Mehdi and Sarah's lives creates shockwaves in all their relationships. Unintentionally and unknowingly, Manu forces them confront their true desires.

Gilbert Désveaux
as Doctor 2
View All

News & Interviews for The Witnesses

View All The Witnesses News

Critic Reviews for The Witnesses

Techine's graceful, forceful drama has the tact not to play narrative games with its subject.

André Téchiné's film features a strong ensemble cast. The film pulls no punches in its depiction of lives in crisis.

The Witnesses doesn't pay off with a great operatic pinnacle, but it's better that way. Better to show people we care about facing facts they care desperately about, without the consolation of plot mechanics.

In The Witnesses, [director] Techine levels his gaze on the '80s, an era of seeming innocence, perhaps license, and one in which biological freedom has led to a loose, even sloppily knit fabric of humanity.

What the characters in The Witnesses -- and the audience -- pay testimony to in André Téchiné's urgent, compassionate, and ultimately optimistic French drama are the toll the epidemic has rung, and the responsibility of the living to choose life.

'The Witnesses' is a film executed with some skill by André Téchiné, but I don't see that it has enough narrative force to provoke any kind of emotion in me. [Full review in Spanish]

All this prepares you for a sucker punch of things that do matter...

Though the specter of HIV/AIDS looms over the second part of the film once Manu is diagnosed, it wisely doesn't take over the latter part of it. Perhaps this is due to the fact that it was a few years before the epidemic first hit France.

The Witnesses has an emotional maturity that adds richness to its social observation.

Best when it turns from bed-hopping into a docudrama, but its effort to personalize the AIDS crisis is not emotionally convincing as the characters lose their individuality.

A somber look back, and for Americans, a view from somewhere else of a time that might have been just recently forgotten.

Audience Reviews for The Witnesses

An unusual but refreshingly straightforward film that sensitively shows how the beginning of the AIDS epidemic affects a group of connected friends. Beautifully filmed, the screenplay keeps things relatively pared back and serves the actors well - the power and intensity comes from the terrific performances instead of artificial melodrama. An intelligent and adult film.

Functional but well performed recollection of the AIDS epidemic and its fallout amongst a group of unlikable bourgeoisie.

[font=Century Gothic]In "The Witnesses," it is 1984 and Sarah(Emmanuelle Beart), a children's writer, is married to Mehdi(Sami Bouajila), a macho and ambitious vice cop. Not being able to concentrate with her baby crying all the time, Sarah persuades her husband to take some time off, so they can go to her summer house, inviting her friend and doctor, Adrien(Michel Blanc), who brings along Manu(Johan Libereau), a young man who he met while cruising in the park one night. During that weekend, Mehdi saves Manu from drowning and the two men become friends...[/font] [font=Century Gothic][/font] [font=Century Gothic]It goes without saying that there has been better fiction written about the early days of the AIDS epidemic including "Longtime Companion" and the play, "Angels in America," which were made at the end of the initial crisis, signaling the beginning of the long battle ahead. Coming at least a decade after them, "The Witnesses" is an astute but slightly overlong movie that is a reminder of how far we have come since then, arguing for love and compassion in the process. But what also sets it apart, is its eroticism, not shying away from the sexual side of the equation which even the more chaste characters have no problem with.[/font]