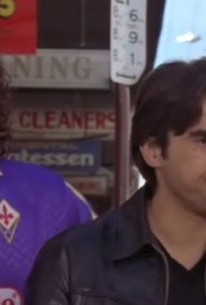 Australian stand up comedy and TV star Nick Giannopoulos makes his cinematic debut with this wacky comedy about slackers looking for sex. Steve Karamatsis (Giannopoulos) is a gainfully unemployed lay-about who has been called "Wogboy" since childhood thanks to his Greek lineage. He and his Italian buddy Frank (Vince Colosimo) model themselves after John Travolta in Saturday Night Fever ("the biggest wog of them all") and go cruising the local clubs for blonde beauties. Frank, who runs a pizza parlor, is particularly adept at the art of seduction. Later, when Steve's car is involved in a fender bender with a limo of the Federal Minister for Employment, Raelene Beagle-Thorpe (Geraldine Turner), Steve demands compensation even though the accident was clearly his fault. Instead, the minister sicks a tabloid TV reporter on him, hoping to expose him as a welfare cheat. The scheme backfires when Steve's beguiling charm and honesty wins over the reporter. Steve soon finds himself as the poster boy for Australia's unemployed. Trying to get the best spin on the situation, Beagle-Thorpe reluctantly hires Steve as an assistant alongside the comely and blonde Celia (Lucy Bell). ~ Jonathan Crow, Rovi

Critic Reviews for The Wogboy

There are no critic reviews yet for The Wogboy. Keep checking Rotten Tomatoes for updates!

There are no featured reviews for The Wogboy at this time.