The Wolf of Wall Street1929 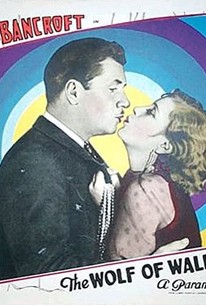 The Wolf of Wall Street Photos

The disastrous 1929 Stock Market crash was still several months in the future when Wolf of Wall Street made its screen debut. George Bancroft stars as ruthless stock manipulator Jim Bradford, who plays his customers for suckers and laughs all the way to the bank. Cornering the copper market at the expense of his hated rival David Tyler (Paul Lukas), Bradford taunts Tyler in public, prompting the latter to plan a sweet revenge. Tyler inaugurates an affair with Bradford's status-seeking wife Olga (Olga Baclanova), which indiscretion is witnessed by the Bradford's maid Gert (Nancy Carroll). Armed with plenty of "inside information," Gert decides to get on the Wall Street gravy train by talking her boyfriend Frank (Arthur Rankin) into investing in copper futures. Alas, things don't go as planned, and soon the impoverished Frank is embezzling from his boss to cover his losses. When Frank is thrown in jail, Gert confronts Bradford, blaming him for Frank's plight. Bradford laughs in her face, whereupon Gert angrily spills the beans about Olga and Tyler. Instead of buying a gun, Bradford handles his wife's infidelity in characteristic fashion by financially ruining Olga, Tyler, and himself. This last bit of stock manipulation has the salutary effect of making Gert and Frank millionaires, which pleases the inscrutable Bradford, who now has ample reason to laugh at himself.

Nancy Carroll
as Gert the Maid

Critic Reviews for The Wolf of Wall Street

It would seem that almost anybody could have written a more exciting and plausible story on the subject after standing for half an hour outside Trinity Church, watching the passing throng of brokers, bankers, investors and stenographers.

George Bancroft, who plays the name part, has created many forceful characters on the silent screen; but those who have never heard him speak know only half his powers. His expression of the role Is commanding, magnetic.

All this becomes moderately entertaining as a pictorial account, but it is the vapid dialogue which reduces most of the proceedings to dullness.

The characters talk all the way through, and their talk is distinct and well recorded. Mr. Bancroft's powerful voice, in particular, registers well.

The slowness which has been characteristic of the majority of the "talkies" previously is never apparent here, for the action, once started, is fast-moving, gaining in momentum and dramatic power toward a tense and wholly logical climax.

Paramount, has produced a gripping story, well directed by Rowland V. Lee, and abounding in the touches of realism only possible in a "talkie."

It's a disappointment after the fine work done by George Bancroft in other, and more virile, pictures.

There are no featured reviews for The Wolf of Wall Street at this time.

The Wolf of Wall Street Quotes