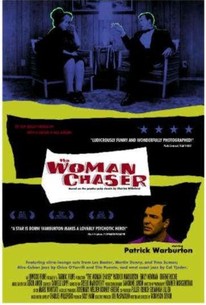 Richard is a L.A. used car salesman on a quest to find the true meaning of his life. When he turns over his car lot to his inept assistants, he begins to write his first screenplay -- a woeful tale about a truck driver who runs over a little girl and gets shot to death trying to outrun the law. When Mammoth Pictures shows interest in the script, he must scramble to get it made, enlisting an assortment of oddball characters, including his washed-up, ex-filmmaker father, his lustful stepsister and his pregnant secretary, as his crew.

Ernie Vincent
as The Man

Delaina Mitchell
as The Man's Secretary

Larry DeLassus
as Waiter at bar

Kim Haas
as Girl by Pool

Paul Jewett
as Orderly
View All

Critic Reviews for The Woman Chaser

... stars Patrick Warburton as a used-car salesman so bored with black-and-white life in fifties L.A. that he ends up trapped in his own semi-wicked noir.

If it ends up feeling like a resource-strapped late-'90s indie in a lot of ways, it is a surpassingly ambitious, strange, and enjoyable one.

Proves that a strong character and a little ingenuity can sidestep any monetary limitations.

The Woman Chaser is a very off-kilter picture, and it's bound to throw viewers for a loop.

A cool, offbeat elegy for old school noir... a time warp Get Shorty with the experimental ethos of a student film and the studied composition of a [loving] homage.

Audience Reviews for The Woman Chaser

There are no featured audience reviews yet. Click the link below to see what others say about The Woman Chaser!