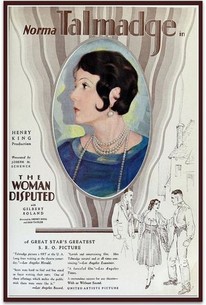 Long-reigning screen queen Norma Talmadge's last silent film (albeit with a synchronized musical score) was the exotic melodrama A Woman Disputed. Talmadge is cast as Mary Ann Wagner, a European orphan girl jointly (and unofficially) adopted by two young military officers: Paul Hartman (Gilbert Roland), an Austrian, and Nika Turgenov (Arnold Kent), a Russian. When her village is conquered by the Russians, Turgenov's interest in Mary Ann shifts from paternal to carnal. She submits to his desires on the condition that he agree not to execute three of the town's leading citizens, including the priest (Michael Vivitch). Naturally, Hartman believes that Mary Ann has betrayed him and renounces her in public. But a deathbed confession by Turgenov reveals that the girl's motives were purely patriotic. Based on a play by Denison Clift, A Woman Disputed also owes a debt to DeMaupaussant's Boule de Suif.

Nicholas Soussanin
as Count
View All

Critic Reviews for The Woman Disputed

There are no critic reviews yet for The Woman Disputed. Keep checking Rotten Tomatoes for updates!

There are no featured reviews for The Woman Disputed at this time.