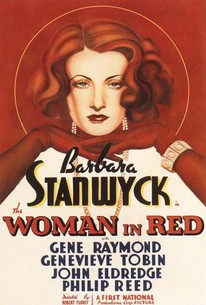 The Woman in Red Photos

In this romantic drama, a horsewoman is forced to work in a society dame's stable. There she meets and falls in love with a destitute polo-player who has curried the favor of his lovely employer. The matron gets jealous of the budding relationship between the horsewoman and the player. A wealthy man, who wants the stable girl, also gets jealous. Fortunately, the young lovers are able to withstand the ensuing turmoil and they elope. A while later, the other man attends a lively party aboard a yacht. There a drunken chorine falls overboard and drowns. One of the ship's officers blames the wealthy man and says he saw him leaving with a mysterious "woman in red." During the ensuing trial, the horsewoman clears his name by admitting that he was with her. It is a difficult admission because she knows she is risking her marriage. Fortunately, her husband and his family support her all the way and the marriage is strengthened. ~ Sandra Brennan, Rovi

William B. Davidson
as Goodyard

Gunnis Davis
as Mooney
View All

Critic Reviews for The Woman in Red

There are no critic reviews yet for The Woman in Red. Keep checking Rotten Tomatoes for updates!

There are no featured reviews for The Woman in Red at this time.

The Woman in Red Quotes