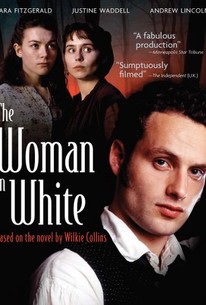 An artist and his students are drawn into a web of danger and deep secrets in this made-for-television adaptation of the novel by William Wilkie Collins. Mr. Hartright (Andrew Lincoln) is an artist who is hired by a gentleman named Mr. Fairlie (Ian Richardson) to teach drawing to his two nieces, Laura (Justine Waddell) and Marian (Tara Fitzgerald). As he travels to the Fairlie estate, Hartright sees a mysterious apparition of a woman dressed in white, and he's still haunted by the sight when he arrives. The event troubles him all the more when he's introduced to Laura, and notices she's nearly an exact double of the strange woman he saw. When Hartright tells his strange tale to Laura and Marian, they're immediately fascinated, and begin trying to solve the mystery of the woman in white, little knowing it will lead them into a maze of danger and wrongdoing. The Woman in White was produced for British television, and made its American debut on the award-winning anthology series Masterpiece Theatre.

Critic Reviews for The Woman in White

There are no critic reviews yet for The Woman in White. Keep checking Rotten Tomatoes for updates!

Audience Reviews for The Woman in White

One of the quintessential novels of the Victorian era, â~The Woman in Whiteâ(TM) features sensational aspects that were common to books originally published in weekly installments â" in this case, false identities, secrets, crime, and adultery. It also includes the belief in mesmerism, with the evil Count Fosco exerting mind control over many characters, as well as the practice of committing those who were troublesome to oneâ(TM)s plans - usually women - to asylums, both of which were real trends in the 19th century. It was highly popular in its day, with a readership approaching 100,000 copies a week. Unfortunately, the movie adaptation from 1948 is a mixed bag. It stumbles early with the initial meeting of the â~woman in whiteâ(TM) by a man on a road at night. Wilkie Collinsâ(TM) friend Charles Dickens considered it to be one of the most dramatic descriptions in literature, but in the film, there is no ethereal shock, and it comes across as a pretty simple meeting. The film captures the dress and language reasonably well though, and there are a couple of excellent performances - Sydney Greenstreet as the mastermind Count Fosco, and John Abbott as Frederick Fairlie, lord of the estate, who is demented, highly eccentric, and fragile. Some of his lines early on to his beleaguered servant Louis are quite funny. I should also say that Eleanor Parker is also fine in her dual role, and Alexis Smith is pretty good as her cousin too â" so there are no issues with the cast. There are two main problems as I see it, and the first is with the story itself, which asks the viewer to swallow a somewhat convoluted plot with some pretty big coincidences. What worked in installment form, or even in the published novel in 1860, is hard to translate successfully to film. The second issue is in cinematography, and overall tone. While it has a few nice moments, itâ(TM)s just not striking or tense enough, starting with that scene on the road at night, and continuing on through the movie. The result is that youâ(TM)ve got a story teetering on the edge of being creaky, filmed in a way that pushes it over that edge. Watch it for the performances, or if youâ(TM)re a fan of the novel and want to see an old film version, maybe to compare it to the 2018 BBC mini-series version.

Good lead performances and high production values but the story feels truncated and that many of the aspects of the source material are missing. Okay but only that.

The Woman in White Quotes