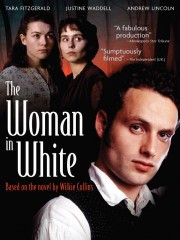 The Woman in White

The Woman in White Reviews

Super Reviewer
Antonius B
November 9, 2018
One of the quintessential novels of the Victorian era, â~The Woman in Whiteâ(TM) features sensational aspects that were common to books originally published in weekly installments â" in this case, false identities, secrets, crime, and adultery. It also includes the belief in mesmerism, with the evil Count Fosco exerting mind control over many characters, as well as the practice of committing those who were troublesome to oneâ(TM)s plans - usually women - to asylums, both of which were real trends in the 19th century. It was highly popular in its day, with a readership approaching 100,000 copies a week.

Unfortunately, the movie adaptation from 1948 is a mixed bag. It stumbles early with the initial meeting of the â~woman in whiteâ(TM) by a man on a road at night. Wilkie Collinsâ(TM) friend Charles Dickens considered it to be one of the most dramatic descriptions in literature, but in the film, there is no ethereal shock, and it comes across as a pretty simple meeting. The film captures the dress and language reasonably well though, and there are a couple of excellent performances - Sydney Greenstreet as the mastermind Count Fosco, and John Abbott as Frederick Fairlie, lord of the estate, who is demented, highly eccentric, and fragile. Some of his lines early on to his beleaguered servant Louis are quite funny. I should also say that Eleanor Parker is also fine in her dual role, and Alexis Smith is pretty good as her cousin too â" so there are no issues with the cast.

There are two main problems as I see it, and the first is with the story itself, which asks the viewer to swallow a somewhat convoluted plot with some pretty big coincidences. What worked in installment form, or even in the published novel in 1860, is hard to translate successfully to film. The second issue is in cinematography, and overall tone. While it has a few nice moments, itâ(TM)s just not striking or tense enough, starting with that scene on the road at night, and continuing on through the movie. The result is that youâ(TM)ve got a story teetering on the edge of being creaky, filmed in a way that pushes it over that edge. Watch it for the performances, or if youâ(TM)re a fan of the novel and want to see an old film version, maybe to compare it to the 2018 BBC mini-series version.

Scott R
March 24, 2018
Wrong movie link for "The Woman in White". That movie was good despite the melodrama.

Frances H
December 20, 2013
I read the book and liked it, but I also liked this movie--Tara Fitzgerald is terrific. This movie is so much more faithful to the book than the 1940's Hollywood version.

Michael J
September 23, 2013
The book is excellent, but this movie version is terrible. It's not only a terrible rendition of the book, it's terrible as a movie in its own right. A disgrace to the Masterpiece Theater. If Wilkie Collins (the author) saw this, he would roll over in his grave. So sad.

Robyn M
½ September 17, 2012
Other then the Candyman The exorcist comes in the top as the Scareist movies out there. It's a Classic but a goodie, with Green peas vomit, turning heads 360 and a priest trying to channel satin i say creepy not in the lightest form. If you want a good scare watch blair witch but if you want to sleep in with a night light for a week and do a few Hail Mary's This film gives you those shivers. You'll never be content alone in the dark again..

Katie S
½ April 29, 2012
It was pretty good, but it really ticked me off when the one maid accuses Walter of trying to rape her. That was absolutely nowhere in the book and it further ticked me off that Marian believed him.

Sue B
October 25, 2011
Not exactly a faithful rendition, but a good theatrical attempt.

Trent R
March 14, 2011
Still works quite well, emphasizing the gender politics more than previous adaptations. However, as the story is streamlined in a more cinematic manner, the epistolary and more episodic nature of the original material is largely sacrificed. A less linear take might be more interesting, although the liberties taken in characterization here work quite well. The interiors are excellent, but exterior shots do not date as well in terms of period aesthetic, reflecting televisual cliches. Interested to compare the upcoming Japanese television adaptation.

Sarah G
½ December 28, 2009
It's a good story with great performances by the cast but this adaptation doesn't flesh out the material of the novel and even one who hasn't read the novel can tell parts are missing.

Super Reviewer
jay n
September 27, 2009
Good lead performances and high production values but the story feels truncated and that many of the aspects of the source material are missing.
Okay but only that.

Angie M
July 28, 2009
Two hours were way too short for this film. Not enough time for us to get to know the characters before we are thrown into the mystery, which ends up not even being well developed. The suspense is hardly engaging. The drama is anything but moving. The "revelations" in the end are too rushed. Tara Fitzgerald carries the whole movie on her shoulders, and is one of the few things worth watching in this loose adaptation of Wilkie Collins' novel.
Page 1 of 1