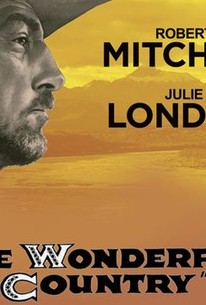 Martin (Robert Mitchum) is an American expatriate working as a gunman for a Mexican overlord. He ran away to Mexico as a youth after he killed his father's murderer. Sent to buy guns in America, he is delayed when he breaks his leg. The U.S. army pumps him for information about the Apaches. He flees to Mexico after killing the murderer of a defenseless immigrant, but finds he is a man without a country wanted on both sides of the border. Future Baseball Hall of Famer LeRoy "Satchel" Page picks up a rifle instead of a baseball for his role as a black U.S. Army sergeant.

Judy Marsh
as Entertainer at Fiesta

Critic Reviews for The Wonderful Country

Audience Reviews for The Wonderful Country

There are no featured audience reviews yet. Click the link below to see what others say about The Wonderful Country!