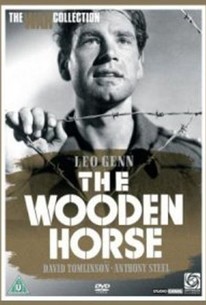 Based on a true incident in 1943, brought to life by the Eric Williams novel "The Tunnel Escape," this is the story of British POWs who escape from a Nazi camp through a tunnel they dug beneath their exercise horse. Told with good humor, it set the pace and style for later prison camp movies done by the British.

Jacques B. Brunius
as Andre

Peter Finch
as The Australian

Walter Gotell
as The follower

Critic Reviews for The Wooden Horse

There are no critic reviews yet for The Wooden Horse. Keep checking Rotten Tomatoes for updates!

Audience Reviews for The Wooden Horse

The true story of three british airmen who escaped from a prison camp in WWII. There's little here that hasn't been done again and again in prison escape films, although it does pick up once they escape the camp; the cat and mouse chase in the dark alleys of nazi Germany is the stand-out scene. Probably a lot more true to life than the Great Escape, but much less entertaining as a result. Solid but unremarkable.