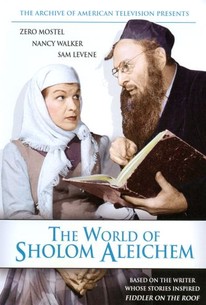 This omnibus release consists of three playlets filmed and aired during television's Golden Age, and starring some of the legends of film and television. The collection originally ran as a two-hour segment on December 14, 1959, on the anthology series The Play of the Week, broadcast locally in New York City via the independent station WNTA.. Each "tale" in the anthology was adapted from a single tale by the inimitable Sholom Aleichem, regarded by many as the "Yiddish Mark Twain." Included are: "A Tale of Chelm," starring Zero Mostel and Nancy Walker in the story of a bookseller attempting to buy a goat; "Bontche Schweig," about a poor man (Jack Gilford) whose recent arrival in Heaven makes the angels cry; and "The High School," about a Jewish merchant (Morris Carnovsky) persuaded by his wife (Gertrude Berg) to let their son attend a particular high school despite the enforcement of quotas for Jewish students.

Critic Reviews for The World of Sholom Aleichem

There are no featured reviews for The World of Sholom Aleichem at this time.

The World of Sholom Aleichem Quotes