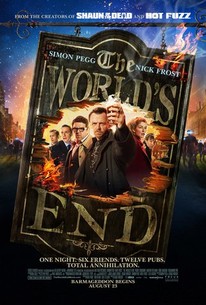 The third installment of director Edgar Wright's trilogy of comedies starring Simon Pegg and Nick Frost, following the successes "Shaun of the Dead" (2004) and "Hot Fuzz" (2007). In "The World's End," 20 years after attempting an epic pub crawl, five childhood friends reunite when one of them becomes hellbent on trying the drinking marathon again. They are convinced to stage an encore by Gary King (Simon Pegg), a 40-year-old man trapped at the cigarette end of his teens, who drags his reluctant pals to their hometown and once again attempts to reach the fabled pub - The World's End. As they attempt to reconcile the past and present, they realize the real struggle is for the future, not just theirs but humankind's. Reaching The World's End is the least of their worries. (c) Focus Features

Ken Bones
as Publican 13
View All

News & Interviews for The World's End

View All The World's End News

Critic Reviews for The World's End

Either I've been slowly losing my sense of humour over the years - nope, just checked my pockets; still there - or these films been operating to the law of diminishing returns.

Where Shaun Of The Dead was inspired, this is comfortingly repetitive. But hey, isn't that the main attraction of any pub?

It is a more mature piece of work, which seems a peculiar way to label a zippy comedy about drinking beer and outrunning the apocalypse.

The World's End marks the third part of Pegg and Wright's self-described "Cornetto trilogy." It's an appropriate moniker. With this final film they've slowed down a bit, grown up a lot. And saved the richest bite until last.

Pegg gives arguably his best performance in the three films, and his chemistry with Frost is unbeatable.

It's fine in its way, a fond and silly salute to pub crawls, old friends, crap cars, roundabouts, British eccentricity and keeping your head in a crisis -- it's just terribly hit-and-miss.

In many ways, Gary is a more tragic extension of Pegg's titular character in Shaun of the Dead, a slacker who never got his sh*t together and is running out of time to do so.

A fantastic end to a terrific, largely unrelated trilogy.

In every instance that a meaningful exchange attempts to emerge, it's swiftly suppressed with loudmouthed antics and ludicrous skirmishes.

Benefits greatly from the undeniable chemistry between Pegg and Frost.

The World's End is comedy gold... underscored by heavier themes: What is the true meaning of friendship, how does being overly reliant on technology and consumerism affect us and how much of our inner child should we give up in order to become an adult?

Raucous, crude, and funny, it's also touching and crushes genre boundaries with a deft touch.

Audience Reviews for The World's End

The final chapter of the Cornetto trilogy feels and looks a lot like Shaun of the Dead a couple of times. While it starts out like another Hangover episode, the twist of an alien conspiracy ends in a (blue) bloody slaughter in English pubs. That's pretty exciting and fun, the fights are wonderfully choreographed and the effects pretty convincing. The cast and the humor work too. Only the ending is surprisingly dark but not without optimism. But it makes you wish a fourth entry of Wright and Pegg reuniting.

An exhilarating and hilarious comedy that is a lot smarter and more complex than it seems at first, as it even surprises us by turning into something completely different when you least expect it and whose brilliant editing and priceless lines make it a true winner.

Estranged friends begrudgingly reunite at behest of former leader-cum-has-been for epic bar crawl. Greasy, leather-clad Simon Pegg really sells the once-cool-badass-vibe-now-tinged-with-glory-days-delusion. The rest of the ragtag quintet are charming, especially handsome/nerdy Martin Freeman and blustery Nick Frost as straight men. When the robot plot starts though, the movie devolves from a hilarious and bittersweet story about friends growing up and apart, to a merely average sci-fi spectacle.

Its storyline may go a bit overboard towards its conclusion, but the film still supplies that custom hilarity that only the combination of Wright, Penn & Frost could create. The World's End is a mash-up of original comedy, apocalyptic hysteria and emotional content. The third film in the "Cornetto Trilogy" displays an even stronger cast of supporting roles that help make it that much more charming and enjoyable. 4/5