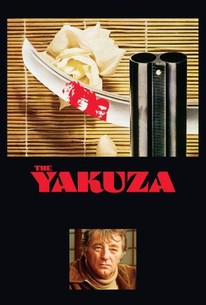 Between making They Way We Were and Three Days of The Condor, Sydney Pollack directed this little-seen thriller from a script by Paul Schrader and Robert Towne. The Yakuza stars Robert Mitchum as Harry Kilmer, a former soldier who returns to Japan to help rescue the daughter of his friend George Tanner (Brian Keith). Once he arrives in the country, Kilmer discovers that the daughter has been kidnapped by the Japanese mafia, called the Yakuza. In order to battle the ruthless organized crime outfit and save the girl, Kilmer finds himself left with few options and reluctantly enlists the help of his old nemesis, Tanaka (Ken Takakura). The film was later re-titled The Brotherhood of the Yakuza and was originally shown in a 123-minute cut.

Harada
as Goro's Doorman
View All

Critic Reviews for The Yakuza

A confused and diffused film which bites off more than it can artfully chew.

The final show-down is one not to be missed.

A superior action movie, but all the same, it's for audiences that have grown accustomed over the last few years to buckets of blood, disembowelments and severed hands flying through the air.

It's a different kind of crime film, an overlooked gem.

In The Yakuza, for the last time as a lead, Mitchum was vibrantly alive.

We are either given too much information or not enough.

"The Yakuza" is a beautifully flawed film that nonetheless catches you off guard when you least expect it.

The Yakuza is old-school in its delivery, the pacing is slow, but stay with it and you will be rewarded with a payoff that is both startling and touching.

... Sydney Pollack ... manifests as much mythic sense as a mill foreman.

has one leg is still straddling the Think Fast Mr. Moto era.

Audience Reviews for The Yakuza

"When an American cracks up, he opens up the window and shoots up a bunch of strangers. When a Japanese cracks up, he closes the window and kills himself. Everything is in reverse." Not quite as wonderful as The Friends of Eddie Coyle, this is still a pretty great late Mitchum movie, and as an example of mid-Seventies Hollywood flirting with the Far East, The Yakuza is certainly better than Peckinpah's The Killer Elite. By modern standards the film is so slow-moving it barely qualifies as a thriller, though the funereal pacing is very deliberate, emphasising the dignity of the characters, maximising the tension and making the sudden, cathartic eruptions of violence all the more startling. The whole movie is brilliantly shot and edited, not just the splendid fight scenes, with Pollack cleverly cutting through much of the script's wordy exposition by carrying the dialogue of one scene over into the next. Among the interesting credits, the script was written by Leonard and Paul Schrader, with rewrites by Robert Towne; Robert Aldrich was originally slated to direct but Mitchum had him replaced by Pollack; and Mitchum's love interest is played by Keiko Kishi, who played the 'Woman in the Snow' in Kobayashi's Kwaidan.

An american meets the dark and violent japanese underworld. an ode to friendship, honor codes and sacrifice among far east gangsters.

Really exciting and haunting East-meets-West-head-on thriller with tough hero Robert Mitchum who goes against the yakuza (Japanese gangster) to protect his Japanese friends he trusts like a family.