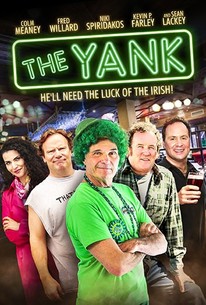 Shot on location in Cleveland, Dublin and County Clare, Ireland, "The Yank" tells the story of Tom Murphy, a middle-aged Cleveland bachelor. For Tom, "the perfect woman" is beautiful, hard-working, family-oriented and (like his parents) 100 percent Irish. So when his best friend, Marty, decides to get married in Ireland, Tom's family and friends send him off on a side splitting epic adventure. Tom does not know it yet, but he's about to come face to face with the real Ireland! Tom's plan to find his dreams takes him on a journey of self discovery to a land that defies his original expectations. He may find out that the grass isn't always greener, even in Ireland. With the help of family he's met for the first time, he may ultimately determine what it is to be Irish in 2013....the year of THE GATHERING!!!! "The Yank" was written and directed by Sean Lackey. Starring Colm Meaney ("The Commitments", "The Van", "Star Trek"), Nicki Spiridakos, Fred Willard ("Best In Show"), Kevin Farley ("Tommy Boy"), Nicole Forester ("Boss"), Charlotte Bradley ("Veronica Guerin") and introducing Sean Lackey. Filmed entirely at landmark locations in Dublin and all across Ireland and Cleveland, OH.

Critic Reviews for The Yank

The cliché dialogue, stereotypical characters, and cheesy, G-rated humor belong in a sitcom.

Audience Reviews for The Yank

There are no featured audience reviews yet. Click the link below to see what others say about The Yank!