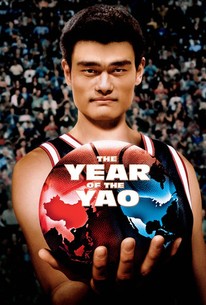 Critics Consensus: This sports bio documentary is given a few fresh angles, including culture clash issues, and the friendship that develops between Yao and his interpreter.

Critics Consensus: This sports bio documentary is given a few fresh angles, including culture clash issues, and the friendship that develops between Yao and his interpreter.

Critic Consensus: This sports bio documentary is given a few fresh angles, including culture clash issues, and the friendship that develops between Yao and his interpreter.

The Year of the Yao Photos

While the traditional American stereotype of people from China portrays them as short, studious, and not especially athletic, Yao Ming turned that image on his head -- standing seven foot six, Yao became the most talked about player in professional basketball when he signed to play with the Houston Rockets in 2002, the first Chinese émigré to play in the NBA. Yao was largely unknown when he first suited up with the Rockets, and many were skeptical about his abilities, especially when he displayed an unsure command of the American style of basketball in his early games. But Yao soldiered on, and by the end of the season he was proving his detractors wrong, among them player-turned-sportscaster Charles Barkley, who once on air promised to kiss the rear end of one of his fellow television commentators if Yao ever scored 19 points in a game -- and had to make good on the pledge when Yao managed the feat. The Year of the Yao is a documentary (produced in part by the NBA) which looks at Yao Ming's first season with the Rockets, how he adapted to American basketball, his relationship with his family and teammates, and what his success means to fans in the United States and China.

Critic Reviews for The Year of the Yao

Should be a natural for NBA fans and please non-enthusiasts as well.

As bright and shiny as you would imagine something co-produced by NBA Entertainment to be, The Year of the Yao provides little insight beyond hanging out with its super-sized star.

There appears to be much more to Yao than is captured here. That's where the movie drops the ball.

A surprisingly layered portrait of a rookie with the hopes of a nation -- a big nation -- riding on his shoulders, and the frustrations and small victories that entails.

The film never feels like some sort of shill, but an actual historical document of this strangest of cultural immersions for a national superstar.

By playing up the hoopla and glitz, the filmmakers have created a vacuum at its center.

The film is happily as fast paced as the sport of basketball itself: there are no bearded, stuttering academics discussing any aspect of the story.

there's plenty to see in this engaging film

Audience Reviews for The Year of the Yao

I am not a NBA or Bassketball watcher or fan. Once in a while I may watch the March Madness series. Basketball players have become spoiled with the large sums of money they make. But I am always interested to see how those from the outside the USA react to our ways of life. I found this film to be very interesting, and wish I had the chance to meet Yao and his family. If I find this movie in a used bin or pawn shop I will pick it up. Its not like the other Disney Sports films this is more of a Bio.

The Year of the Yao Quotes