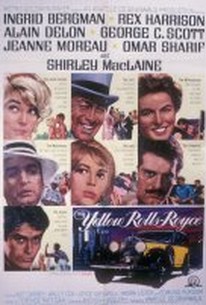 In this drama, from director Anthony Asquith, the lives and stories of three different people are linked together by their possession of an unusual car, a yellow Rolls Royce Phantom II. Lord Frinton (Rex Harrison) is a diplomat who purchases the exquisite auto as a gift for his wife (Jeanne Moreau). After Frinton's horse wins the Royal Gold Cup, Lady Frinton incurs the Lord's wrath when she is caught in the back seat of the Rolls with his underling John Fane (Edmund Purdom). In the 1930s, the car is bought by Italian gangster Paolo Maltese (George C. Scott), who is carrying on with the hatcheck girl Mae Jenkins (Shirley MacLaine). The two take a tour of Italy and see all the historic sights, but Mae is less than impressed. While Paolo is in the United States on one of his frequent hit-man assignments, Mae and a street photographer try out the back seat for comfort and carnal pleasure. Art Carney plays Paolo's associate Joey. In the final episode, Gerda Millett (Ingrid Bergman) is the married American woman who buys the car in 1942. With Hitler attacking Yugoslavia the brave and brazen beauty helps fight the Nazis by smuggling Davich (Omar Shariff) across the border, and this duo also find themselves in the back seat for a roll in the Rolls. Davich shows his gratitude by shipping the car along with Gerda back to the United States. ~ Dan Pavlides, Rovi

Rex Harrison
as Marquess of Frinton

Jacques B. Brunius
as Duc d'Angouleme
View All

Critic Reviews for The Yellow Rolls-Royce

There are no critic reviews yet for The Yellow Rolls-Royce. Keep checking Rotten Tomatoes for updates!

Audience Reviews for The Yellow Rolls-Royce

Bittersweet series of episodes with a cast only a top studio could pull together at its peak. All are good but Ingrid Bergman gives the most nuance to her character. Beautiful looking film with gorgeous locations.