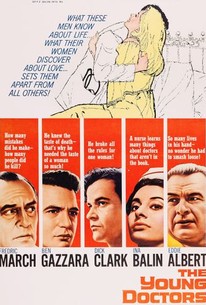 The Young Doctors presaged the many medical dramas that would become series hits on American television from the 1960s onward. The cast of physicians in this tale about the relationship between two doctors even includes one female physician. Ben Gazzara is Dr. David Coleman, a new medic who has high ideals and enthusiasm to match. His mentor is Dr. Joseph Pearson (Fredric March), who is head of their department and has been around enough to know what daily problems, including bureaucratic overload, can do to a doctor's outlook. The push-and-pull exchange between the two men fuels the story, which features two important cases that challenge them. Actor George Segal debuts in this film as one of the doctors.

Addison Powell
as Board Physician

Critic Reviews for The Young Doctors

It's too rich, too plummy a mixture for artistic translation, and although some genius might make us take to heart the agonies and excitements, in the ordinary way they simply provide an enjoyable off-reality, realism at a suspect level.

Harrowing hospital drama has some medical insights, but is grim and terrifying.

Audience Reviews for The Young Doctors

There are no featured audience reviews yet. Click the link below to see what others say about The Young Doctors!