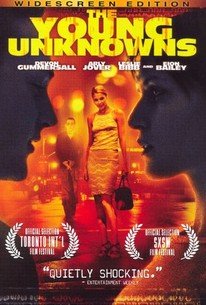 Four friends have an unpleasant afternoon when two let their egos get the better of them in this independent drama. Charlie (Devon Gummersall) is an aspiring filmmaker with lots of ideas but little to show for them. He is house-sitting for his father, who directs television commercials and is out of town on an assignment. Charlie and his girlfriend Paloma (Arly Jover) spend much of their time getting wasted; Charlie then makes grand pronouncements about the future of cinema while she patiently listens. Things become tense, however, when Charlie's friend Joe (Eion Bailey), who has a taste for drugs, stops by with his girlfriend (Leslie Bibb) and the conversation turns ugly. The Young Unknowns was adapted from the stage drama +Magic Afternoon by Wolfgang Bauer.

Critic Reviews for The Young Unknown

This bleak little drama started as a play, and I'd bet that even onstage it felt contrived.

First-time director Catherine Jelski dredges up every cliche about druggy, obnoxious dreamers on the fringes of Hollywood and assumes that said cliches have the power to shock and surprise.

Jelski's casting is daring, in its way, and I wish more American filmmakers would follow her example.

The writing and the lead performance of Devon Gummersall in Catherine Jelski's The Young Unknowns makes this spoiled rich kid movie almost tolerable.

There is nothing to redeem this movie, and no real reason to see it.

Feels like a pity-party for a few spoiled jerks who, all things considered, don't really merit 90 minutes of my undivided attention.

[an] eloquent, damning case against American culture and family

Within this haze of drug abuse, cockiness and hollowness, we're supposed to feel for our young, spoiled protagonist. Sadly, what we mostly feel is the pain of our eyes constantly rolling in our heads.

You're not going to feel enlightened by The Young Unknowns and, frankly, you'll probably benefit by keeping them unknown from your film-going pocketbook.

The film wants to be a revealing character study of aimless Hollywood wannabes, but the story is just not compelling enough to make the viewer care.

A film of probative quietude with fiercely invested in performances; in small ways perceptive and intelligent but overall too lackadaisical in its intellectual application to leave upon viewers more than a faint, passing memory.

There are no featured reviews for The Young Unknown at this time.