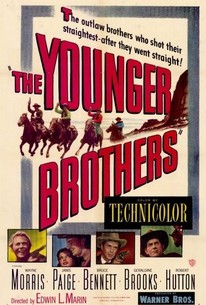 The story of the outlaw Younger Brothers is duly Hollywoodized in this Technicolor western. Wayne Morris, Bruce Bennett, Robert Hutton and James Brown star as Cole, Jim, Johnny and Bob Younger, who as the film begins have just been released from jail. They try hard to follow the straight and narrow path, but when ex-Pinkerton man Ryckman (Fred Clark) launches a campaign of vengeance against the boys, out come the six-guns. One of Ryckman's schemes is to use female bandit Kate (Janis Paige) to lure the Youngers back into a life of crime. The villain very nearly succeeds, but the boys are saved by the beneficence of the screenwriters. Prominent in the cast of The Younger Brothers is Alan Hale, who showed up in practically every Warner Bros. western made between 1939 and 1950. ~ Hal Erickson, Rovi

Ian Wolfe
as Chairman
View All

Critic Reviews for The Younger Brothers

Neither director nor cast seem interested in their fate.

There are no featured reviews for The Younger Brothers at this time.