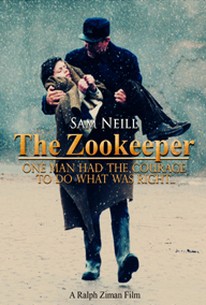 A man who has devoted his life to animals rather than dealing with the emotional and political uncertainties of humans finds he's challenged when his zoo becomes a battlefield in this downbeat drama. Ludovic (Sam Neill) lives and works in an unnamed city in the Balkans; once an idealistic communist, he grew disenchanted with politics in general and socialism in particular, and now devotes his energies to his job as a zookeeper. Political turmoil has thrown the zoo into the middle of a war zone, and after repeated bombing raids have come perilously close to the animal sanctuary, the staff has been ordered to evacuate. But Ludovic refuses to leave, and with the help of a staff veterinarian (Om Puri), he single-handedly tends to the needs of the animals. Ludovic, however, learns that there's no escaping the chaos around him, and as troops led by Dragov (Ulrich Thomsen) raid the zoo and take the veterinarian away in the name of "ethnic cleansing," he realizes he must make some sort of a stand, and soon gives sanctuary to Ankica (Gina McKee) and Zioig (Javor Loznica), a mother and her son who narrowly escaped execution in a nearby village. The Zookeeper was director Ralph Ziman's second film dealing with the dangers and tragedies of racially motivated politics, following his 1995 debut Hearts and Minds.

Om Puri
as The Vet

Critic Reviews for The Zookeeper

a haunting film, superbly directed, and filmed with a harsh beauty

Audience Reviews for The Zookeeper

i was quite enjoying it, right up tilll the end and then it just lost me and now i have no idea wat the whole point of the movie was!! i like the story of sam neill staying at the zoo to look after all the animals wilst the rest of the country are fighting and then he comes across a chid and his mother!! it tells you a little about Sams past but dosnt bother to go anyfurther into it!! i dnt get it!!