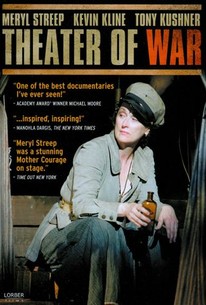 Bertolt Brecht's +Mother Courage and Her Children is widely regarded as one of the most important plays of the 20th century and a powerful, punishing statement of protest against the grim folly of war. Brecht's drama is often staged in Europe, but it has rarely been given major productions in the United States; however, in 2006, with the ongoing war in Iraq occupying the minds of many in the United States, playwright Tony Kushner prepared a new English translation of +Mother Courage and director George C. Wolfe persuaded Meryl Streep to return to the stage to play the lead in a production that ran for free in New York's Central Park for four weeks. Filmmaker John Walter examines this landmark production in the documentary Theater of War. In addition to featuring excerpts from the play, Theater of War offers a behind-the-scenes look at the creative process behind the staging of +Mother Courage, and includes interviews with most of the creative team. Walter also offers insights into Brecht's tumultuous life and career, the history of his masterpiece, and what many regard as the play's definitive staging, starring Brecht's wife, actress Helene Weigel. Theater of War received its premiere at the 2008 Tribeca Film Festival.

Critic Reviews for Theater of War

Engrossing and timely, this crackles with ideas about art, politics, religion, and the terrible costs of war.

For theater lovers in general, this documentary -- a look at a high-powered production of a modern classic and a chance to watch Meryl Streep build a character -- is intriguing and educational. For partisans of Bertolt Brecht, it's mandatory.

All of this makes an interesting, if not gripping, film about the play, the playwright and the lead-up work to a stage production. It also leaves me wanting a great deal more.

Theater of War, Walter's invigorating film, asserts the value of Brecht -- and the power of art -- for our troubled times.

As a onetime dramaturg and Brechtian, I enjoyed the chin-wags and the glimpses of Streep in rehearsal -- especially her quivering admission that she can't bear the thought of anyone seeing her process.

Theater of War, while informative, feels more like a trailer for Mother Courage than a film of its own.

The trauma of the past is expressed in the woundedness of the present and through this expression finds a type of sanctuary.

The delights were in seeing arguably America's greatest actress, Streep, going through the clunky process of rehearsing while telling us how she interpreted her role.

Mildly engaging with brief moments of insight, but it's mostly a missed opportunity to dig deeper into the play's sociopolitical relevance to the world of today

Meryl Streep is absolutely the least interesting thing about this inventive doc that takes an unprecedented look at the staging of a high-profile theater production.

If you can't define "Brechtian," this documentary, ostensibly about the Public Theater's production of Mother Courage and Her Children, may elude you, yet the all-too-brief glimpses of Meryl Streep finding meaning in the play may make it all worthw

Audience Reviews for Theater of War

There are no featured audience reviews yet. Click the link below to see what others say about Theater of War!