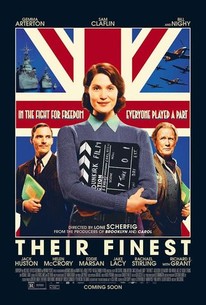 Critics Consensus: Carried along by a winning performance from Gemma Arterton, Their Finest smoothly combines comedy and wartime drama to crowd-pleasing effect.

Critics Consensus: Carried along by a winning performance from Gemma Arterton, Their Finest smoothly combines comedy and wartime drama to crowd-pleasing effect.

Critic Consensus: Carried along by a winning performance from Gemma Arterton, Their Finest smoothly combines comedy and wartime drama to crowd-pleasing effect.

The year is 1940, London. With the nation bowed down by war, the British ministry turns to propaganda films to boost morale at home. Realizing their films could use "a woman's touch," the ministry hires Catrin Cole (Gemma Arterton) as a scriptwriter in charge of writing the female dialogue. Although her artist husband looks down on her job, Catrin's natural flair quickly gets her noticed by cynical, witty lead scriptwriter Buckley (Sam Claflin). Catrin and Buckley set out to make an epic feature film based on the Dunkirk rescue starring the gloriously vain, former matinee idol Ambrose Hilliard (Bill Nighy). As bombs are dropping all around them, Catrin, Buckley and their colorful cast and crew work furiously to make a film that will warm the hearts of the nation

Jeremy Irons
as Secretary of War

News & Interviews for Their Finest

British Independent Film Winners Announced: God’s Own Country Wins Best Film
On DVD This Week: The Fate of the Furious, The Lost City of Z, and More
Latest Smurfs Gives Critics the Blues

View All Their Finest News

Critic Reviews for Their Finest

It feels inappropriate to be moved by a film about propaganda during an era of "alternative facts." Yet I found my soul soothed by Their Finest.

There's a sweet love story and some wonderful work by an array of British actors. My heavens, this is charming, rib-tickling escapism.

The characters' endless revision of the film within the film tends to heighten one's awareness of the compromises that must have gone into the writing of this formulaic piece.

Their Finest is poignant, well-acted, and at times, pretty fun to watch.

Arterton is excellent, her chemistry with Claflin absolute perfection, the two actors disappearing into their respective roles.

Scherfig has shot the film in a soft-focus wash of chestnut and sepia tones -- the colours of nostalgia -- and the screenplay catches Evans' tone without being quite as funny as the book, despite Nighy's Ambrose.

Sparks fly between her and a cynical fellow writer Tom (Sam Claflin, duly intellectualized with specs and a 'stache) and Arterton knows how to pretty-cry with panache when tears are required.

A delight from start to finish, except for the part where the film rips your heart out.

...well it's close to cinema perfection in my eyes.

Ultimately, I liked Their Finest as a historical look at the moviemaking process, and the character drama adds a nice skeletal structure with which to explore that.

A lovely film about film-making and women's changing roles during WWII, which is sure to melt the most cynical of hearts. I certainly had something in my eye at more than one point.

Audience Reviews for Their Finest

Gemma Arterton, Sam Claflin, Bill Nighy, and a stellar cast of British character actors shine a light on the movie making process in which fact gives way to truth in order to tell a compelling story. There is humor and pathos, intrigue and great courage, hardships and sacrifices, all set during the siege of London. Directed by Lone Scherfig, based on a novel by Lissa Evans, I can highly recommend it.

Being released the same year as Christopher Nolan's 'Dunkirk' coming in July, it seems a little coincidental similar referenced film is also released. 'Their Finest' is really about 1940's propaganda film making at the height of WWII, where an unlikely ensemble band together to make something incredible. I must say ever since I saw 'Prince of Persia' in 2012 I've always had a huge crush on Gemma Arterton and this film holds no bars as this is an outstanding performance from her as a Welsh screenwriter, while her chemistry and relationships with the other cast members is superbly delightful. It is in itself a piece of social commentary on the world war 2 period, also on past film industry practices. Admirable as it is as a small scale drama, whilst throwing smart pieces of comedy and romance into it's mix as it's one of the most unique and well accomplished pieces of British Cinema I've seen this year alone. I highly recommend this delightfully crowd pleasing underrated British flick that should be on people watch list this year even if you are definitely thinking of seeing Dunkirk in July.

"They don't make movies like they used to ..." goes the common complaint, but here is a work that directly contradicts that. Set in wartime Britain, a woman gets hired to work on a inspirational movie about women during the war. Drenched in nostalgia for a simpler time it mostly succeeds insofar as romcoms go.

Their Finest (not to be confused with Their Finest Hours, even though this is based on a book called Their Finest Hour and a Half) is a disarmingly sweet and poignant true story that resonates with empowerment and the power of creativity. Set at the start of WWII, the British film industry is trying to make ends meet as well as provide morale boosts to the public. Catrin Cole (Gemma Arterton, her best performance yet) goes in for a copywriting job and walks out a hired screenwriter, pegged to write the "women's parts." Thanks to the depleted workforce, Catrin has an opportunity she never would have otherwise and she blossoms under the crucible of creative collaboration. This was one aspect of the movie that I was very taken with, as a writer and screenwriter myself, the natural progression of creativity, solving a problem, finding a solution, and the elation that follows. The complications keep coming, first from the British film office who need the movie to be inspirational, then from the divergences from the true story of a pair of French girls who stole their uncle's boat to rescue soldiers at Dunkirk, then from working with American producers who insist on an American hero who can't act, and then from natural calamities of scheduling, casting, and oh yeah, the bombing and blitzes that could obliterate everyone. The movie is alive with conflict and feeling and the sweet story of a woman finding her sense of empowerment in the arts. The movie-within-the-movie is filmed to period appropriate techniques, and Bill Nighy is effortlessly amusing as an aging actor still fighting for some scrap of respect in an industry ready to forget him. The insights into the different stages of film production were fun and illuminating. I appreciated that the war isn't just something in the background but a constant. It upsets the order, takes lives, and is a striking reminder why these people are doing what they're doing. The film also rhapsodizes the power of the arts, and in particular cinema, in a way that feels reverent without being overly sentimental or self-congratulatory. A great collection of characters is assembled as a ramshackle sort of family with a mission, and the movie drives right into one payoff after another, lifting your spirits and warming your heart. There is a sudden plot turn that will likely disappoint many in the audience eager for a simple happy ending, but I almost view it as industry satire on the difference between American and European cinema tastes. Their Finest is a small gem with sympathetic characters trying their finest and achieving something great. It's a rich story that deserves its moment in the spotlight and I'd advise seeking it out if possible. Nate's Grade: B+