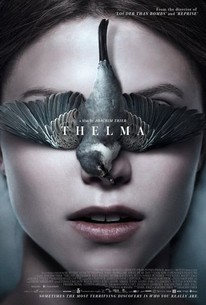 Thelma, a shy young student, has just left her religious family in a small town on the west coast of Norway to study at a university in Oslo. While at the library one day, she experiences a violent, unexpected seizure. Soon after, she finds herself intensely drawn toward Anja, a beautiful young student who reciprocates Thelma's powerful attraction. As the semester continues, Thelma becomes increasingly overwhelmed by her intense feelings for Anja - feelings she doesn't dare acknowledge, even to herself - while at the same time experiencing even more extreme seizures. As it becomes clearer that the seizures are a symptom of inexplicable, often dangerous, supernatural abilities, Thelma is confronted with tragic secrets of her past, and the terrifying implications of her powers.

Sigve Boe
as Man Outside Bar

Thelma is visually and sonically impressive, with images that linger in the mind long after the film has ended, but a superfluous narrative detour strips the film of any uniqueness.

The scary moments are there, but they take patience. And then they take you by surprise.

"Thelma" treads the line between the psychological and supernatural, gracefully at first, and then with increasing abandon.

Thelma is a beautiful and heartbreaking film that is an impressive addition to the coming-of-age story. A lady bird, indeed.

As a hushed, haunting portrait of a young woman reconciling daughterly duty and her own incipient power, "Thelma" feels like a stylish, timely allegory for the present moment.

It's chilly in Oslo, and in this movie; the better to sneak up on you quietly, like an unexpected shiver.

Just as Let The Right One In gave the vampire genre a Nordic Noir makeover, Thelma has done the same with the superhero genre, but with much less success.

Thelma is ultimately a high-art reflection on finding who you are even if it's different from who you thought.

Thelma's story plays out beautifully, even through the pain and sorrow.

An intense treatise on loneliness, repression, and control.

Thelma is the kind of brooding, emotionally-charged movie that demands your full attention at all times.

Such small emotions. Such large repercussions. Part Carrie, part Moonlight. Thelma explores our deepest desires and the expectations of the world that don't often align. This is all tone and Norwegian director Joachim Trier nails exactly what he was seemingly aiming for.

Though it may seem at first like an unoriginal combination of Carrie and Blue Is the Warmest Color, Thelma is a haunting and sometimes pretty tense film centered on a young teenage girl from a strongly religious family struggling with her sexual impulses and desires.