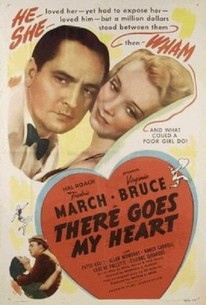 Heiress Virginia Bruce tries to prove her worth by taking a job as a shopgirl in the store owned by her family. The pampered young lady is given a crash course in pragmatism by her worldly roommates Patsy Kelly and Nancy Carroll. Reporter Fredric March learns of Bruce's ruse and plans to tell all in his newspaper. Thrown together by circumstances, the reporter and the heiress are shipwrecked and end up on a small island. They continue to bicker with one another until the "deus ex machina" arrival of a kindly minister (played by former silent comedy star Harry Langdon) convinces March and Bruce that they truly love one another. More than a little inspired by It Happened One Night, There Goes My Heart is an uneven but pleasant romantic comedy. It was the first Hal Roach Studios production to be released by United Artists.

Etienne Girardot
as Hinckley, the Secretary

Greta Granstedt
as The Maid
View All

Critic Reviews for There Goes My Heart

[There Goes My Heart] manages to overcome the handicap of a hackneyed plot with clever performances by its stars and America's great comic institution, Patsy Kelly.

Audience Reviews for There Goes My Heart

Sweet bit of silliness with an enjoyable cast. Patsy Kelly comes off best.

Great dramatic actors do flunk the comedic role exam. Just as one of my all-time favorite dramatic actors, Robert De Niro, simply cannot do comedy, Fredric March gets an "F" as well. I present Exhibit A.

It's fascinating to me how some very great actors -- great in the popular annals of film history -- can't seem to make the move to the other side of the acting world, be it dramatic actors who fail in comedic roles or vice versa.

By the way, if you've not noticed over the years, I'm a huge fan of Turner Classic Movies, and I strongly encourage all flixsters of any age who may not have checked out TCM to do so. There are so many, many great movies I've discovered thanks to TCM. Without TCM, I would never have seen so many wonderful movies from past movie history. Like my movie buddy Cheryl, I don't think I've quite hit the jaded age where I'll say that the only good movies are "old" movies, but TCM is really a very accessible treasure trove of films we might never add to our Netflix queues.

There Goes My Heart is no It Happened One Night, but it is a valuable piece in the puzzle of the history of screwball comedies that is not to be missed. And I am so thankful that I've now seen Virginia Bruce. Thank you TCM! What a wonderful actress. She's worth the price of admission all by herself : )

There Goes My Heart Quotes