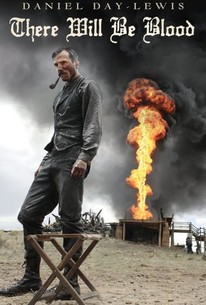 Critics Consensus: Widely touted as a masterpiece, this sparse and sprawling epic about the underhanded "heroes" of capitalism boasts incredible performances by leads Daniel Day-Lewis and Paul Dano, and is director Paul Thomas Anderson's best work to date.

Critics Consensus: Widely touted as a masterpiece, this sparse and sprawling epic about the underhanded "heroes" of capitalism boasts incredible performances by leads Daniel Day-Lewis and Paul Dano, and is director Paul Thomas Anderson's best work to date.

Critic Consensus: Widely touted as a masterpiece, this sparse and sprawling epic about the underhanded "heroes" of capitalism boasts incredible performances by leads Daniel Day-Lewis and Paul Dano, and is director Paul Thomas Anderson's best work to date.

There Will Be Blood Videos

There Will Be Blood Photos

Writer-director Paul Thomas Anderson steps outside his contemporary world of dysfunctional Angelenos to explore a very different dysfunctional man -- an oil pioneer whose trailblazing spirit is equaled only by his murderous ambition. There Will Be Blood is Anderson's loose adaptation of the novel Oil! by Upton Sinclair, and it focuses its attentions on Daniel Plainview (Daniel Day-Lewis), a miner who happens upon black gold during a disastrous excavation that ends in a broken leg. Pulling himself up from the bowels of the earth, both literally and metaphorically, Plainview embarks on a systematic and steadfast approach to mastering the oil business. Using plain-spoken and straightforward language, Plainview launches a campaign to convince small-town property owners they should let him drill their land. Without him, they won't have the equipment to access the profit beneath their feet. He builds an empire this way -- and gradually becomes obsessed with the intrinsic value of power, growing increasingly irascible and paranoid in the process. Plainview meets his match in Eli Sunday (Paul Dano), a teenage preacher in the small California town of Little Boston, whose brother tipped Plainview off to the town's plentiful supply of untapped oil. To fully reap the benefits of the land, Plainview must suffer the opposing whims of this "prophet," whose legitimacy is questionable at best. And it's unclear if either man is prepared to pay the humiliating price the other wants to exact. There Will Be Blood features an anachronistic soundtrack by Radiohead's Jonny Greenwood, and it was shot in the same town where the James Dean epic Giant was filmed. ~ Derek Armstrong, Rovi

Critic Reviews for There Will Be Blood

The sprawling, dark epic hinges on atmospherics and the moody air. It's heightened further by the ominous music, especially in the long, wordless opening sequence set in the mines with man pitted against nature.

Day-Lewis's performance will simply have you like a fever you can't shift. The landscapes are hard and big, but he scathes through them as if they were no more than your Uncle Stan's allotment.

In a way, there's not a step you haven't seen in classics going as far back as Citizen Kane. Still, there are enough oddities in the details to keep you full of questions.

This is a film by Paul Thomas Anderson that has overshot the runway of movie modernity with something thrillingly, dangerously new.

This sometimes magnificent, decidedly strange film is a portrait of a terrible, rapacious man.

One of the most wholly original American movies ever made.

Daniel Day-Lewis delivers one of the best performances of all time. Paul Thomas Anderson's riveting epic of greed, capitalism, religion and family is one of the ages. A modern masterpiece. [Full review in Spanish]

Day-Lewis' fully committed and memorable performance as Daniel Plainview the selfish and successful oil man elevates the film. But it is one of those films were everything just works to make a great film. The Johnny Greenwood soundtrack adds a lot.

Histrionic, fatally confused and socially evasive, Paul Thomas Anderson's There Will Be Blood is all the worse for its touching upon important subjects, oil and religion in American life.

The only other contemporary filmmakers operating at this level are saddled with lesser scripts, or haven't Anderson's ambition to perfect them by breaking them.

An absolutely phenomenal performance by Daniel Day-Lewis brings to life as charismatic and captivating a character as any to grace the screen this year.

An iconic performance by Day-Lewis. [Full review in Spanish]

Audience Reviews for There Will Be Blood

Glistened by Daniel Day-Lewis' flawless performance, the film undertakes a greed-driven story under the light of an oil-boom-era and turns it into an eerie sensation. There Will Be Blood is upheld by Paul Thomas' Anderson's masterful direction, disturbingly-powerful score and once again, Daniel's stroke of genius, which is still considered one of the actor's more recognizable pieces of work. 4/5

Poor storytelling and virtually no character development. Arbitrary, episodic and confusing. Yes - DDL is God and the cinematography and sense of place and time are uncanny but after a terrific opening hour this film just coughs and sputters.

There Will Be Blood Quotes