There's Something About Mary1998 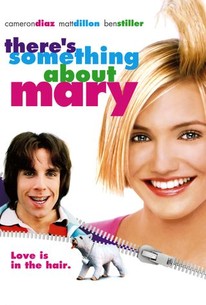 Critics Consensus: There's Something About Mary proves that unrelentingly, unabashedly peurile humor doesn't necessarily come at the expense of a film's heart.

Critics Consensus: There's Something About Mary proves that unrelentingly, unabashedly peurile humor doesn't necessarily come at the expense of a film's heart.

Critic Consensus: There's Something About Mary proves that unrelentingly, unabashedly peurile humor doesn't necessarily come at the expense of a film's heart.

There's Something About Mary Videos

There's Something About Mary Photos

The Farrelly Brothers set this romantic comedy in their home state of Rhode Island. In 1985, when teen-nerd Ted Stroehmann (Ben Stiller) challenges a high-schooler who's bullying retarded Warren Jenson (W. Earl Brown), his concern prompts Warren's sister, the dazzling and desirable Mary Jenson (Cameron Diaz) to choose Ted as her senior prom date, a fact Ted's pals find hard to believe. However, on prom night, Ted gets his penis caught in his zipper, so the much-desired date never happens. Living in Providence and waxing nostalgic 13 years later, Ted hires Pat Healy (Matt Dillon) to locate Mary, and the creepy private investigator finds her in Miami, where she lives with her tan-shriveled roommate Magda (Lin Shaye). After Pat develops a stalker-style fixation on the lovely, unattached Mary, he lies to Ted, telling him that she's now an overweight mother confined to a wheelchair. Employing professional eavesdropping equipment, Pat gathers a dossier on Mary's life and future plans, information that forms the basis for more lies when Pat begins dating her. Sure enough, Mary falls for Pat, although her friend Tucker (Lee Evans) is very suspicious of Pat's claim to be a Harvard-educated architect. Meanwhile, Ted learns the truth but continues to encounter offbeat obstacles as he accelerates to Miami in hopes of finding happiness with his true love. Former Modern Lovers singer Jonathan Richman vocalizes a narrative ballad of onscreen commentary in the Cat Ballou (1965) tradition. Most of the cast sings and frolics to Build Me Up, Buttercup by The Foundations during the closing credits. ~ Bhob Stewart, Rovi

Brett Favre
as Himself

Critic Reviews for There's Something About Mary

If the sight of a large chunk of a man's private parts caught in the teeth of a zipper is funny -- and I'm not saying it isn't -- then have I got a movie for you.

This one is dumbest. And funniest, as if that matters even a little bit!

Losers competing against one another (and even bigger losers) for a dishy woman: That's the setup for [the Farrellys'] wrackingly funny new farce There's Something About Mary, maybe the ultimate nerd masochistic fantasy.

Crudely made, somewhat overlong and larded with plenty of things that don't work, pic stands as proof positive that a comedy can be far from perfect and still hit the bull's-eye if it delivers when it counts in its big scenes.

Despite my earlier reservations about Bobby and Peter Farrelly, they're progressively winning me over, partly because they keep getting better.

Remarkable for all the sick and politically incorrect sight gags it gets away with in its rule-breaking romp through the supposedly sacred laws of what makes people laugh, and what doesn't.

Blends ludicrous fantasy, uncomfortable reality, and cartoonish slapstick, which magically straightens out the mess of combating characters - all with romance and sincerity.

The movie managed to walk a line between raunchy, gross-out comedy and a romantic comedy.

Gauche, garish, and gross, a prime example of the coarsening of our culture and of the art of comedy in film. It's also pretty darn funny. [Blu-ray]

A romantic gross-out comedy: What a concept!

Audience Reviews for There's Something About Mary

The best movie by the Farrelly Brothers.

The Farrelly Bros. make a fun comedy-filled flick that presents the best in both Ben Stiller and Cameron Diaz. Though it suffers minor bumps it is still filled with laughter and jokes. 4/5

There's Something About Mary Quotes