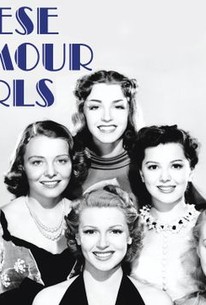 In this comedy/drama, a feisty taxi-dancer (Lana Turner in her first starring role) takes on a sorority full of snooty debutantes after an equally snobbish Ivy Leaguer (Lew Ayres) who goes on a bender, meets her and invites her to his school's annual weekend bash. The next day, the fellow forgets all about the invite. When the party begins, the low-class girl shows up. The fellow then warns her that the catty debutante crowd will gleefully unsheathe their claws and rip her to shreds. The taxi-dancer is not so easily frightened and not only stays, she also stands up to every one of the wicked sorority sisters. She then gets sweet revenge by making herself the most popular girl of the weekend.

Critic Reviews for These Glamour Girls

There are no critic reviews yet for These Glamour Girls. Keep checking Rotten Tomatoes for updates!

Audience Reviews for These Glamour Girls

Minor B of more interest for its cast of up and coming future stars than the ordinary script. Lana saddled with an unbecoming hairstyle is clearly being groomed for the big time. She still hadn't finished the transformation from the girlish Judy Turner to the sleek Lana but she is on her way. The film's lower budget origins are obvious in the fact that many of the plot points are teased along and then they and the actors involved simply disappear from the narrative. The film's most intriguing character, the insecure and lost Betty, is assigned to the best actress of the bunch Marsha Hunt but unfortunately treated as a secondary player. Her actions are never fully explained and the aftermath of her story is completely ignored however she makes more of an impression than any of the other performers and you miss her when she's not on the screen.