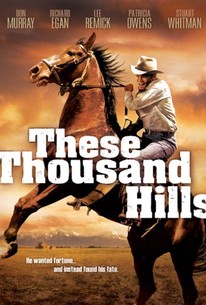 Don Murray stars as a humble cowboy with aspirations for bigger things. He borrows money from his dance-hall girlfriend Lee Remick to buy a ranch, then dumps Remick in favor of banker's daughter Patricia Owens. Murray runs for political office, and in so doing is compelled to join a posse in search of his best friend Stuart Whitman, who has turned rustler. Anxious not to compromise his climb to the top, Murray stands by in silence as Whitman is lynched. In the end, however, Murray regains his essential decency when he is shot while trying to protect his ex-girlfriend Remick from bullying land baron Richard Egan. Based on a novel by A. B. Guthrie Jr., These Thousand Hills may look and sound like a western, but it has "film noir" written all over it.

Fuzzy Knight
as Sally, the Cook

John Epper
as Swede
View All

Critic Reviews for These Thousand Hills

Audience Reviews for These Thousand Hills

Average western with advantage of good cast. Don Murray is okay in the lead, he never really had that elusive something to be a great movie star but is a fine actor. The supporting cast is full of familiar faces that all provide excellent work, the real standout is Lee Remick who offers up a delicately shaded perfomance of a girl whose life has been full of bad breaks and hard luck. It a shame her part is relatively small since she's the most compelling character and actor in the film. The color and cinematography is also noteworthy. Not a bad movie just not great.