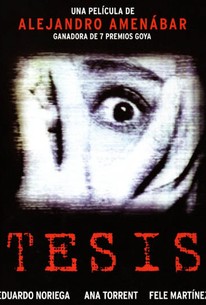 In this suspenseful Spanish thriller, a film student's curiosity over an accidentally discovered "snuff film" places her in mortal danger. Madrid film student Angela's ordeal begins when she decides to write her thesis about violence in film. Her student adviser volunteers to search the university's film vault for her and it is he who accidentally finds a secret room and randomly picks up an unmarked cassette. He decides to preview it in the screening room and what he sees is so horrifying that he drops dead from heart failure. Angela finds him there and without thinking grabs the film he was watching. Back home she discovers it is a filmed account of the torture and death of a coed who has been missing for three years. Rather than be sensible and call the police, Angela begins her own investigation. Her first stop is the strange Chema, a student aficionado of hard-core porn and violent films. He sees the film and is able to identify the type of camera used. Sexy student Bosco has one and he was acquainted with the dead girl. Though he is a prime suspect, Angela is subtly drawn to him. This doesn't sit well with the jealous Chema. Bosco is not her only suspect. Castro, her new faculty advisor and Bosco's girl friend Yolanda may also have been involved.

José Luis Cuerda
as Professor No. 1

Emiliano Otegui Piedra
as Professor No. 2

(The) director Alejandro Amenábar balances actual, terrifying visuals with Hitchcockian red herrings for one of the best debut films in years. The technology might be quaint, but the fear remains resonant.

Tesis won't exactly knock the socks off of viewers; However, it is exceptionally acted, with all actors delivering solid performances and fully submitting to the demands of some of the more arduous action sequences.

A film that is terrifying when you want, that knows how to raise the production of adrenaline in the respectable with ease. [Full Review in Spanish]

It only manages to be startling in passing.

Spanish filmmaker Alejandro Amenábar ('Open Your Eyes') is already in his element with this low-budget thriller debut.

The young director has an exciting way of filming and keeping one engrossed in the story...

Amenábar's low-budget debut stands out as the first display of his talent as both a writer and director, a suffocating thriller that is not only extremely tense and suspenseful but also respects the viewer's intelligence and keeps us always engaged.

I can understand why this brought Alejandro Amenabar to a fruitful career, but I really just thought this was a serviceable, brainless thriller. The one thing that irked me most is that Angela is simply one of the dumbest horror protagonists I've ever seen. She is vacant, unresourceful and a God-awful liar. For one, she NEVER calls the police, despite being embroiled in a steadily worsening snuff film situation; she has no compelling reason not to do so. None. When confronted by people who are suspicious of her snooping around, she stutters and says "no" a lot, or just repeats what they're saying to her. She has about two good ideas through the entire course of the film and it's kind of amazing that she even pulls these off. We are led to believe that Angela is an intelligent girl, but she shows us almost none of this, making one awful decision after the other. Angela's indiscretions serve to highlight some flaws in the plot - again, why does no one call the police? Why are the killers keeping their video tapes in the basement of the school, and how come so many people have access to this basement when security is presumably patrolling it? And ultimately, what compels Angela to try and solve this case herself? All we know is that she has a cursory interest in (though supposed disdain for) violence, but that offers no real reason for her not to get anyone else involved. This is a technically strong film with a decent message, though "obsession with violence in the media" is really old-hat by now. It's a far better delivery of the theme than Funny Games, I have to say it, and I'm sure it hit harder back in 1996. I guess this aged in a way that Se7en did; sensational pictures rarely seem to last very long.

Tesis is an excellent thriller about the powerful fascination that surrounds violence and death. Especially in movies. Angela is a visual communications student who begins to make her thesis about violence in cinema. From then on, she encounters, face to face, the rawest expression of her subject of research, closer to her than she can imagine. Angela's fascination/rejection relationship with violence implicates her in a terrible murder and the uncovering of a network of snuff filmmaking. The suspense in Tesis is perfectly built. Alejandro Amenabar puts everyone against Angela and makes us try to guess who is really who he says he is. The performances (Ana Torrent, the little girl from the Spirit of the Beehive, Eduardo Noriega from Open Your Eyes and Fele Martínez also from OYE and recently The Bad Education) are excellent. The best part is that it doesn't leave things resolved. Even after all the twists and shocks, there is something "in the air" to think about as the credits roll. When a film can entertain, frighten, and challenge you, imho, it's a good film. The public wants violence, does it need it?