They Came to Cordura1959 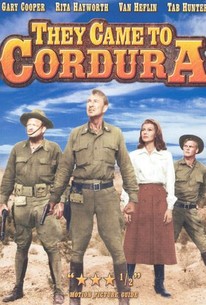 They Came to Cordura Photos

Gary Cooper stars in one of his final roles in They Came To Cordura, Robert Rossen's moody study of the thin dividing line between heroism and cowardice. Cooper plays Major Thomas Thorn, a U.S. Army officer in the expedition into Mexico against Pancho Villa. Because he hesitated during a moment of decision in a battle, he has been labeled a coward. His commanding officer, Colonel Rogers (Robert Keith), orders Thorn to recommend five men for nomination for the Congressional Medal of Honor for bravery in the battle against Villa. Angered that Thorn did not nominate him for the Medal of Honor, Rogers charges Thorn with transporting the men through a broiling and dangerous desert to the rear area of Cordura. They begin the trek accompanied by Adelaide Geary (Rita Hayworth), the daughter of a dishonored U.S. Senator, who is accused of treason since she owned the hacienda where Villa's men stayed. As they travel across the desert expanse, Thorn ponders why these men are considered heroes while he is labeled a coward. As their journey continues, the heroes turn into a mutinous rabble, with Thorn reduced to holding the group at bay with a loaded gun.

Critic Reviews for They Came to Cordura

The subtle ironies wrapped up in the true meanings of human courage and cowardice are examined, sometimes a bit too wordily, in a strong action drama starring Gary Cooper.

Realism seems to go a step farther than it need, and show the average man as rather lower than is credible; and it is long and improbable, though never dull.

Far from Coop's best, but his presence makes it worthwhile for fans.

Audience Reviews for They Came to Cordura

There are no featured audience reviews yet. Click the link below to see what others say about They Came to Cordura!

They Came to Cordura Quotes