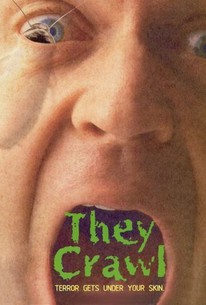 After a fiery wreck involving half the city and a runaway bus, the coroner (Ken Lerner) discovers that the bus driver's body has no internal organs, which is eerily similar to the body of a dead computer geek they also recently discovered. Former Special Forces dude Ted Gage Daniel Cosgrove, the brother of the computer hacker, begins an investigation with the lovely, skeptical detective Gina O'Bannon Tamara Davies. What they find is that a bizarre cult headed by Tiny Frakes (Mickey Rourke) is responsible for unleashing a mutant horde of cockroaches on the city. No amount of bug spray, or bad press, will stop these critters.

Adam Gordon
as Cop
View All

Critic Reviews for They Crawl

By the time the genetically mutated killer cockroaches get wise and morph into this giant rhino-lookin' thing, you'll be fast asleep.

Audience Reviews for They Crawl

There are no featured audience reviews yet. Click the link below to see what others say about They Crawl!