They Made Me a Criminal1939 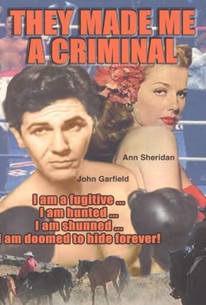 They Made Me a Criminal Photos

In this remake of The Life of Jimmy Dolan, a world-champion boxer believes he killed another man in a drunken fight, so he flees West to lie low. A bunch of troubled kids act as a kind of psychological mirror for him as he recognizes his problems and attempts self-redemption.

May Robson
as Grandma Rafferty

William B. Davidson
as Inspector Ennis

Jack Wise
as Ticketman
View All

Critic Reviews for They Made Me a Criminal

The strength of this picture lies, not so much in the story, as in the excellent performances.

John Garfield has mode the grade, and Warner Brothers motion picture firm have themselves a brand new star.

Made competently enough and solidly acted so that one might forgive all the plot holes, unconvincing romance and outdated cornball antics.

There's nothing in this material that calls for [Busby] Berkeley's particular talents.

Audience Reviews for They Made Me a Criminal

While directed by Busby Berkeley there actually is little for him to do but to choreograph a couple of fights in this standard Warner Bros. B-feature about New Yorkers hiding out out-in-the-sticks. Can wise-to-it-all street hustlers give up what they know for some of that folksy middle Americanism old Hollywood loved to pretend it revered? The Dead End Kids do well backing up John Garfield's streetwise tough play, while Ann Sheridan and Claude Rains are advertised but in reality hardly onscreen at all. Still, at least it ain't no cheap gyp of a film.

This is a remake of the life of Jimmy Dolan? No wonder I thought I's seen it already!

Busby Berkeley directs this drama that features an element of crime mixed with drama and some humor. A feel good flick that holds interest. John Garfield plays a young champion prizefighter that is led to believe he murdered a reporter in a drunken brawl; so he high steps it out of town. He heads west and stops in Arizona taking refuge on a ranch run by Ann Sheridan and staffed by the Dead End Kids featuring Leo Gorcey and Billy Halop. The gang convinces the boxer on the run to enter a prizefight to win stakes for a future gasoline station. But spoiling a good thing is detective Claude Rains, who recognizes the champ and is set to take him back. A nice escape back to days gone by.

I'm a big fan of the "M-YA SHEEE" talk and this movie had plenty to go around. John Garfield reminded me of three actors all crunched into one: Liam Neeson,Charles Bronson and Edward G Robinson, nothing to do with acting styles or anything, his face just reminded me of those guys. The dead end kids were pretty entertaining especially at the end when they were bullshitting their way into the boxing fight at the end. You know I'm not too sure if I'm pinpointing the exact movie but I couldn't help but think of Butch's character in Pulp Fiction but it's completely different that was sort of a pride fucking with you sorta story this is more wrongfully accused type stuff. Enjoyed it.

They Made Me a Criminal Quotes