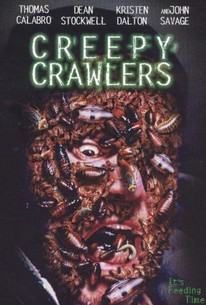 John Tierney
as Fisherman No. 1

Kenneth G. McIntyre
as Fisherman No. 2

Garry N. Little
as Fisherman No. 3

Laara Sadiq
as Nurse No. 1

Joanne Harrison
as Nurse No. 2

Violette Haas
as Trauma Nurse No. 1

Judith Yamada
as Trauma Nurse No. 2

Sylvesta Stuart
as Ensign
View All

Critic Reviews for They Nest

... loath as I am to suggest anything big-screen instead of small, you're better off seeing terrible things happen to Michelle Pfeiffer in What Lies Beneath.

Audience Reviews for They Nest

I guess it shouldn't have surprised me to find out that this was a TV movie. I don't mean to say I'm actually surprised, but I was gonna start off with that, before I did some research and found out that, in fact, this was a made-for-TV movie. And I guess that should have been obvious when the main character, who pricks his finger or something, says 'gosh dang it' and 'spit' instead of goddamnit and shit. I don't know why I bothered watching this. I legitimately mean that, I'm not saying that to be insulting towards this film because of its quality, though if I'm honest it's not like I could say this was a good movie. What I mean by that is that the reason I watched this movie was 'just because'. The closest I can come to a reason is the fact that I just wanted to see something goofy and stupid. And a movie about cockroaches using the insides of human corpses as breeding grounds was stupid enough for me. Realistically speaking, the movie does recognize its own absurdity and it doesn't pretend to be anything more than just a B-movie. I have to appreciate that lack of pretension. I'm not saying that they didn't try to make a good movie here, given the parameters (even though they failed), but they didn't go out of their way to do something great. And, since this was a TV movie, I can't say I blame them. TV movies have short lifespans as it is anyway, you're only as relevant as the network you're on. And this being something of a fringe movie, for like Sci-Fi Channel (as it was in in 2000 at the time of this film's airing), then I'm gonna assume that it was a movie that just came and went and people barely remembered it. It has that feeling, like as much as I got into some of the sillier aspects of the film, there's nothing about this movie that I will remember come this time next year. If we're all still alive by this time next year that is. I'll probably remember it as 'that cockroach movie' without actually recalling any of the details within it. Then again, with my memory being the way it is, I don't really recall many movies I see, with the exception of the really great ones or the really shit ones. This isn't either of those, it falls somewhere in between. If I'm being honest, I'd say that this was, at best, a below average-to-average movie. There's nothing truly inherently wrong with it. And by that I mean from a scripting level. Yes, the dialogue is nothing to write home about, but the story is fairly basic and it doesn't really do much in the way to piss you off with nonsensical scenes that don't fit within the context of the film. The acting is so-so, with Dean Stockwell being the best of the bunch. The special effects are ok at best. There's nothing that this movie excels at, as if it wasn't obvious already, but there's nothing wrong with that, at least in this case. You could make the argument that they could have put in more of an effort. But, be real here, if you knew that your movie was mostly gonna be watched as background noise because somebody who's on their laptop/phone can't stand the quiet, then how much of an effort would you make? That's a shitty excuse, yes, but there's only so much effort you're gonna make for something that only a very small percentage of people will ever see. You could say that for every movie ever made, yes, but this is the type of movie that falls into obscurity very quickly. Regardless of the fact if it ended up being good or not. The fact of the matter is that this was produced to give the channel it aired on some additional content for a year or so. Hate to sound so cynical, but that's what it was. With all of that said, for about 84 minutes or so, I didn't mind watching this. It doesn't take itself too seriously, so that makes it an infinitely easier watch. This is ok at best. There's no real reason to watch this, but you could have worse experiences watching a movie.

I saw this film about six years ago and I've no interest in ever seeing it again. This is one of the most creepiest films I have ever seen. The idea of carnivorous cockroaches that can evolve super quickly is just....*brrh*