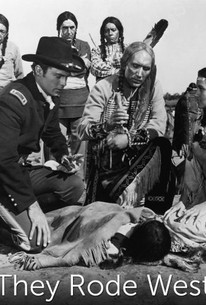 After Robert Francis became an "instant star" in Columbia's The Caine Mutiny (54), the studio rushed Francis into as many vehicles as possible. In They Rode West, Francis plays a young Army doctor, stationed at a remote cavalry post. The post's commander (Philip Carey) immediately clashes with Francis due to the latter's humanitarian attitudes towards Native Americans. When a malaria epidemic breaks out at a local Kiowa encampment, Francis insists upon treating the Indians, despite opposition from both Carey and the tribe's medicine men. May Wynn, Francis' Caine Mutiny vis-a-vis, is third-billed in They Rode West. Alas, Robert Francis' skyrocketing career plummeted to earth when he was killed in a 1955 accident.

Critic Reviews for They Rode West

Sympathetic to the Indians western.

Audience Reviews for They Rode West

Standard but decent military western with the doomed Robert Francis earnest if a bit stiff as a caring doctor. Donna Reed's character is a bit muddled coming off at first as a shallow flirt but she adds more depth to her as the picture goes along. Good production values and location filming help make the film more than it is.