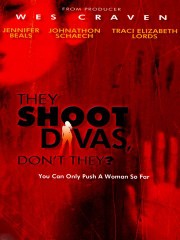 They Shoot Divas, Don't They?

They Shoot Divas, Don't They? Reviews

Claire M
½ March 22, 2012
I liked this movie, it's an easy to watch one, downside is i saw it on tv and now I cant find it anywhere on the internet grrrr, the youtube version cuts huge parts out

Super Reviewer
Nicki M
½ January 12, 2011
Below average, but not unenjoyable trashy psycho movie.
Jennifer Beales plays Sloane, a washed up pop singer in her early 40's, who employs Jenny, played by Keri Lynn Pratt, to be her assistants helper. Jenny is waitressing at a party Sloane attends and she seems sweet and eager to please. Little does Sloane realise that Jenny is not quite who, or what, she seems to be!
This has a plot you can see coming a mile off. The opening shows a young child coming inside to find her mother has shot herself while watching Sloane's music video on tv (I could picture her music having that effect on a few people, actually, but I digress...). Hmmm... I wonder who that young girl might be and if she may have an axe to grind with Sloane ...
The acting is pretty poor, but I kind of liked the over the top acting of Keri Lynn Pratt. It is a trash movie, and it fitted. Jennifer Beales is kind of attractive and she played a good diva. Traci Lords only appears briefly at the end as a tv presenter and is pretty campy here.
I certainly wouldn't urge anyone to seek this out or pay money to rent it, but if you catch it on tv, as I did, you may not be too cross about the lost hour and a half.

Elizabeth J
September 5, 2008
Love it! Really entertaining and easy to watch and Jennifer Beals can sing, is there anything she cant do? Love her!
Page 1 of 1