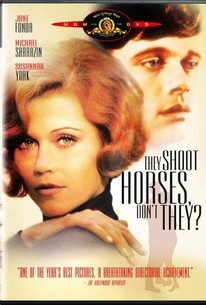 They Shoot Horses, Don't They? Photos

A total of nine Academy Award nominations went to this wildly acclaimed, allegorical drama set amongst the contestants in a marathon dance contest during the Great Depression. Gig Young stars as Rocky, the obnoxious emcee for a dance marathon that offers prize money of $1,500, a small fortune during hard economic times that brings out the worst in several participants. Among them are Gloria Beatty (Jane Fonda), a malcontent who's partnered with a drifter, Robert Syverton (Michael Sarrazin); a pregnant farm girl (Bonnie Bedelia) and her husband (Bruce Dern); a sailor (Red Buttons); and an aspiring actress (Susannah York). As the marathon winds into a staggering second month, suspicion, doubt and insecurity rages among the competitors and even the decaying and increasingly manipulative Rocky, leading to a shocking crime.

Critic Reviews for They Shoot Horses, Don't They?

The material is simple and irresistible, and Sydney Pollack stages it well (though without transcending the essential superficiality of his talent).

A sordid spectacle of hard times, a kind of existentialist allegory of life.

The acting is strident and overblown, the narrative technique gimmicky and obvious, and the implication that the competitors' situation is a microcosm of a wider-reaching American malaise rather pretentious.

The movie is by far the best thing that Pollack has ever directed (with the possible exception of The Scalphunters).

What has happened to Hollywood cinema that it seems impossible that a movie like this could be produced today? Spoiler: Hollywood infantilism.

To this day, They Shoot Horses, Don't They? holds the record for the most Oscar nominations (9) received by one film without Best Picture being among them.

With a masterful visual style, Pollack builds a shocking, almost existential portrait of the limits of the human condition and the socioeconomic setbacks of individuals who cannot escape the circle of misery. [Full review in Spanish]

If there was ever a film that completely captures the utter desperation and despair of poverty, it's this one.

The film's problem is that it is almost an embittered celebration of exhaustion.

They Shoot Horses, Don't They? becomes not merely an incisive critique of the exploitation that celebrities are inclined to, but perhaps of capitalism itself.

Kyle Turner
Under the Radar
View All Critic Reviews (33)

Audience Reviews for They Shoot Horses, Don't They?

A dance hall requires poor drifters and lost Depression-era souls to keep dancing for prize money. This film shouldn't work: set almost entirely in one location with the main characters fatigued to the point of almost passing out, the film's pace could slow to a standstill, much like the "dancing" we see by the end of the film. But it does work, thanks to the fantastic performances by Jane Fonda and Michael Sarrazin. Gig Young adds some energy to the film as one of the few conscious characters. The film is about the Depression, but it's more about class issues. Watching poor people dance to their deaths, the rich are shown getting pleasure out of others' misery, benefitting from the society that deems them superior. Overall, with everything against it, They Shoot Horses, Don't They? nevertheless delivers.

In Depression era down-and-out Los Angeles a dance marathon on Santa Monica pier affords the opportunity to look in on the various lives involved. Overdone, yes, okay, but still moving as the cast embraces the cut out characters presented. Sarrazin, York, et al deliver the goods, but the picture belongs to Henry's little girl who manages to do Daddy proud. Gig Young as the ringmaster is nothing short of phenomenal.

A mostly competently made, fascinatingly bleak tale concerning a dance marathon and how some very different characters are affected by its rigorous rules. This movie came so close to being a great, uncompromisingly grim look on the state of show-business, but it makes a deadly mistake at its conclusion, going a step over-the-top and opting to be poetic not naturally, but just for the sake of being so. Still, despite it taking a while to get into it, once you get adjusted to the pace it becomes enamoring. Jane Fonda couldn't be better, and she gets solid support from Michael Sarrazin as her on-again, off-again dance partner, Red Buttons as a likable sailor, and Susannah York who is a nervous breakdown waiting to happen. Sydney Pollack creates a dark atmosphere for his depressing picture, but doesn't quite bring it into classic/greatness territory, as evidenced by its melodramatic finale.

They Shoot Horses, Don't They? Quotes