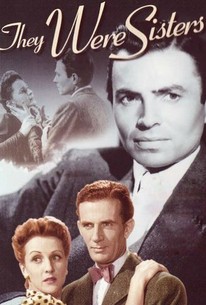 They Were Sisters Photos

Based on a novel by Dorothy Whipple, the British They Were Sisters is not so far removed from the standard Hollywood plot of three sisters' lives taking divergent paths. The siblings in this instance are Phyllis Calvert, Dulcie Gray and Anne Crawford. Each sister is married, thus the film periodically shifts attention from one household to the next. What gives this film teeth is James Mason, playing the nastiest and most abusive of the husbands. Incidentally, They Were Sisters supporting player Pamela Kellino became James Mason's real-life wife.

Helen Goss
as Webster
View All

Critic Reviews for They Were Sisters

Although it could not be called striking or outstanding, this is an interesting film which leaves its own kind of quiet satisfaction.

There are no featured reviews for They Were Sisters at this time.

They Were Sisters Quotes