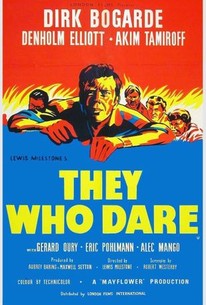 They Who Dare Photos

Filmed in England, They Who Dare is undeservedly the least-known of director Lewis Milestone's sound films. Set in the Aegean sea during World War II, the film recounts the exploits of Britain's Special Boat Squadron. Sent on life-or-death commando missions, the squadron (six English, four Greek) hops from island to island, sabotaging Axis air bases. The centerpiece of the film is an assignment to dynamite German air fields on the island of Rhodes. Robert Westerby is credited with the screenplay of They Who Dare, and Lewis Milestone insisted the story was taken verbatim from the reminiscences of the squadron's two survivors; on the other hand, star Dirk Bogarde claimed that the film was improvised as they went along.

Akim Tamiroff
as Capt. George One

Anthea Leigh
as Marika
View All

Critic Reviews for They Who Dare

There are no critic reviews yet for They Who Dare. Keep checking Rotten Tomatoes for updates!

There are no featured reviews for They Who Dare at this time.

They Who Dare Quotes