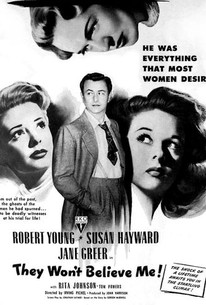 They Won't Believe Me Photos

In this classy noir melodrama star Robert Young plays Larry Ballentine, a no-good dirty rat so effectively that one is possessed with the impulse to throw something at the screen and yell "Take that, you crumb!" On trial for the murder of his wife Gretta (Rita Johnson), Larry recalls in flashback the events leading up to this disastrous moment.The audience learns that, although Larry has never truly committed murder, he is responsible for the deaths of two women and the ruination of a third. While leeching off his wealthy wife Gretta, he callously enters into an affair with Janice (Jane Greer), then later runs off with Verna (Susan Hayward), who dies in an auto accident caused by Larry. Intending to straighten out his life by murdering Gretta for her money, Larry finds that he doesn't have to bother -- but that he'll be blamed for her death all the same. They Won't Believe Me was produced by frequent Alfred Hitchcock collaborator Joan Harrison.

Lida Durova
as Girl at Newsstand

Critic Reviews for They Won't Believe Me

Producer Joan Harrison & associates have brought the story to the screen with considerable skill.

Audience Reviews for They Won't Believe Me

fun film noir told in flashback, with robert young as a cad accused of murder. for the record, i don't believe him :p

Excellent undeservedly obscure noir with an excellent dark performance from the usually genial Robert Young. Economically directed by Pichel with terrific contributions from Susan Hayward, Jane Greer and particularly Rita Johnson. Great denouncement, catch it if you can.

They Won't Believe Me Quotes