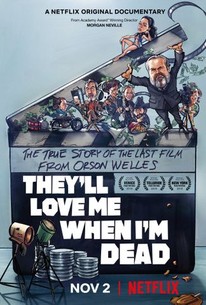 Critics Consensus: They'll Love Me When I'm Dead opens an entertaining window into the creative process - and late-period professional travails - of a brilliant filmmaker.

Critics Consensus: They'll Love Me When I'm Dead opens an entertaining window into the creative process - and late-period professional travails - of a brilliant filmmaker.

Critic Consensus: They'll Love Me When I'm Dead opens an entertaining window into the creative process - and late-period professional travails - of a brilliant filmmaker.

They'll Love Me When I'm Dead tells the story of legendary director Orson Welles at the end of his career. He was no longer the "Wonder Boy" flush with success from Citizen Kane, but an aging artist in exile whose luck had run out. "The Other Side of the Wind" was the feature film meant to be his Hollywood comeback vehicle. For over six years he struggled to complete it, filming whenever he could make enough money from acting gigs and commercial appearances. In 1985 it all ended. The film remained unfinished upon his death, and stayed locked in a vault for almost four decades. Comprised of never-before-seen footage from Welles and original interviews with cast and crew, the documentary, like Orson's work, is a dense story of betrayal made up of many fragments of high and low culture.

News & Interviews for They'll Love Me When I'm Dead

View All They'll Love Me When I'm Dead News

Critic Reviews for They'll Love Me When I'm Dead

With this documentary, Morgan Neville has made a movie about Orson Welles that would have transfixed the great master himself.

[Not] just a companion piece to The Other Side of the Wind. As it turns out, bearing Welles's words in mind, it becomes almost a meta version of Welles's movie. I would like to think that the great magician himself would have approved.

The movie can't help but portray [Welles] as an inspired and inspiring figure.

This documentary is an oddity.

A briskly entertaining romp through a director's exile period that shows the flights of creativity and madness someone without limits can get up to.

...awash in wonderful archive footage from the later years of his life as he went about the elongated production of [The Other Side of the] Wind

It's a brilliantly created documentary on the gusto, exasperation and genius of the filmmaker who at an early age gave us Citizen Kane.

A more straightforward doc would have served the film better, and likely made people who chose to watch it before Wind more curious about the film itself.

A window into Welles' hall-of-mirrors mind.

Audience Reviews for They'll Love Me When I'm Dead

There are no featured audience reviews yet. Click the link below to see what others say about They'll Love Me When I'm Dead!